We’ve read a number of stories about the Ramos W7 in the past but haven’t really been able to get all the details together in one post. The W7 has had a formal launch but the Ramos website still only shows a photo and what is likely to be the ‘coming soon’ teaser. CES maybe?  The Ramos seems to have raised a few eyebrows though so we’ve scraped together everything we can in terms of specs and put it in the database. 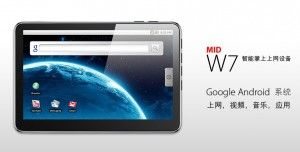 Capacitive, WVGA touchscreen, HDMI-out and a 3G option make great specs but we’re missing the details on the ports, battery, size and weight at the moment. We’re also a little aprehensive about the Rockchip RK28 processing platform [translated product page]. As far as we can tell, it’s an ARM11-based or ARM9 CPU (remains unconfirmed) which means it won’t compete with the Archos Android Tablet in terms of processing power. It’s all very well having dedicated subsystems to playback 720p-quality video but if you’re building a device on Android, you’re building it to be able to do a lot more than just audio and video.

There are some nice pics over at JT’s World. 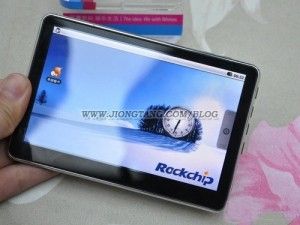 Availability remains unknown. Local pricing is said to be $191 and $235 depending on 8GB or 16GB storage.