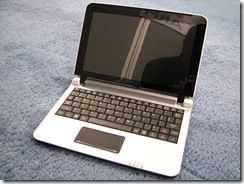 One of the only Nvidia Tegra2-based devices I really got to see in detail this week was the Mobinnova smartbook. Using the same design as the earlier Tegra device it looks solid and well-built and it weighs significantly less than most netbooks. The UI demo that you’ll see in the video below was slick and smooth and clearly there’s a fun photo and music experience in there but when the Windows CE-based Internet Explorer pops up you get the impression that there’s only a limited depth to the software. This is going to be the biggest issue for smartbooks â€“ buyer confidence. Will the user trust the software to do what they think they need? Android is one of the only ways out of this issue.

In the video you’ll see the Mobinnova UI but you’ll also hear Bob Morris, Director of Mobile Computing at ARM, talk about the smart devices segment. It was a very interesting conversation. I also recorded a seperate interview with Bob and i’ll post that in the coming days.