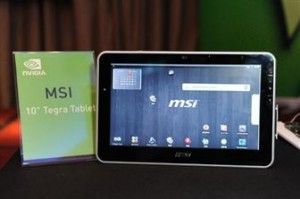 Some might say MSI is mad to try and get tablet news out there right now but I think otherwise. There’s a huge wave of new tablet-focused customers searching and learning today so it makes sense to try and get news and images out.

Digitimes is helping them out today with news that their tablet, a Nvidia Tegra2-based device seen running Android with a 10″ colour touchscreen in the image above, will be out in the second half of 2010 for a price of about $500. Clearly MSI are a long way away from any formal commitment saying only that they will have different models based on customer demand.