â€œThe simple fact is that you’ll never get everything on one device. It wont happen until we evolve better eyes and smaller fingers. inch

Those were my first words, 4 years ago on the Carrypad Journal; a blog I started after spending a few months researching my desires for a new phone. I wanted more than a phone could offer and after looking at the physics of the problem, decided that I would never achieve my goal. I threw in the towel and decided that a  second device was needed. A few weeks later, the ultra mobile PC was born out of Microsoft’s Origami Project and I focused on that as a possible solution. To many people’s surprise, the ultra mobile PC segment still continues today with UMPCPortal, the evolution of my original blog, being possibly one of the longest running businesses in the ultra mobile PC sector!

As technology matures and pricing drops, more consumer focused solutions are starting to hit the market which is why I restarted the Carrypad website last October. Maybe my dream device is coming in 2010! 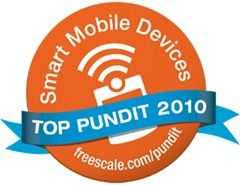 4 years of focus on the 3rd mobile screen might be the reason I picked up an award this weekend for being a ‘Smart Device Pundit.’

It’s almost unbelievable to be put in such a fantastic list of names and if you’re not already following these 19 people in your RSS feeds or twitter accounts, make sure you check them out. See the Freescale announcement or the Twitter/smart-device-pundits list for more info.

I’m extremely happy with the award and it makes a great birthday present for Carrypad. Thanks Freescale and thanks to all the readers and partners that have supported us over the years.