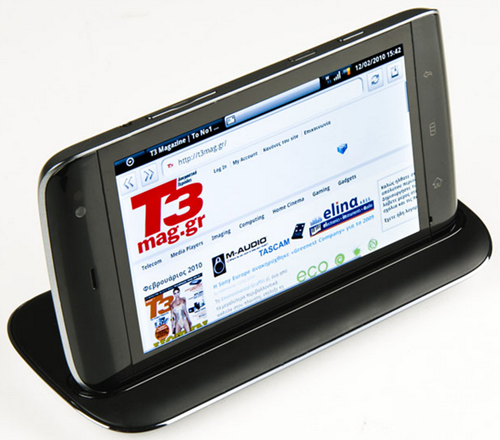 Or perhaps we should say base? Anyway, a Greek site has turned up the first look at the Dell Mini 5’s dock. The dock has HDMI out as well as USB port (likely to power the unit and transfer files from a computer) The Mini 5 [Product page] will be able to do 720p video as stated and demonstrated at MWC earlier in the week and the HDMI will help you get that to an HDTV. There is a rather peculiar video, on said Greek site, in which we get a look at the sleek dock. Unfortunately the camera doesn’t get up close and personal.

Hopefully the dock is either very inexpensive (bundled with the unit perhaps?) or offers some sort of functionality that hasn’t yet been revealed. It seems silly not have built HDMI directly into the device, but perhaps Dell is trying to squeeze some extra money out of those that want to use the device as a portable HD player.