This is a follow-on article to ‘Is Tunnel Creek the new Consumer Handheld CPU from Intel? No. (Better Things Are Coming)‘

In this article I want to talk about Intel’s Moorestown, a platform Intel has been public about  for over 2 years. It’s Intel’s stab at a platform for the mobile, always-on, always connected segment. That is, smart devices. From smartphones and smart tablets all the way up to smart netbooks. As ARM-based smartphones get bigger and more powerful and already have ALL the smart features required, there’s a huge risk to Intel so clearly there’s a serious business reason for doing this and getting it right.

At IDF in Beijing today, Pankaj Kedia presented the latest information on the Moorestown platform and in his slides, he gives a good overview of where the device is targeted and what its key features are. Let me walk you through some of the slides. (Obviously I wasn’t present for the presentation and i’m not privvy to Pankaj’s notes. These are simply my opinions.) 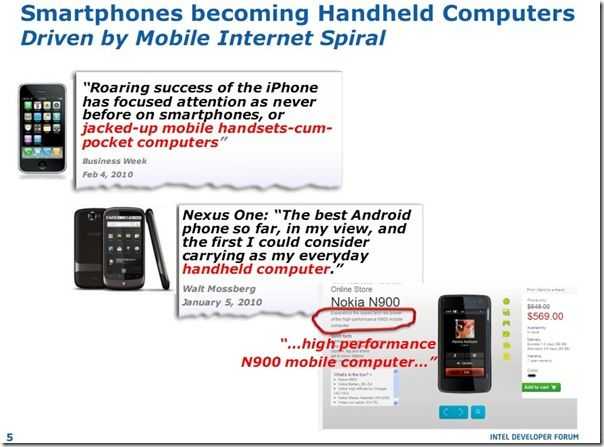 Here’s the threat. I doubt Pankaj would have used that expression though as it’s clearly being taken as an opportunity. 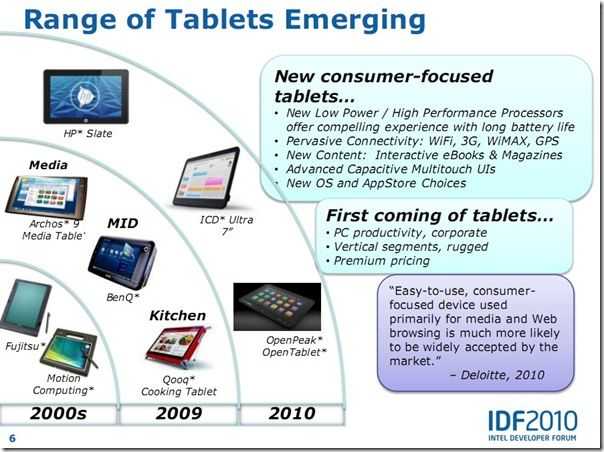 For the first time, Intel have started to reference the tablet segment when talking about Moorestown. Clearly this is becoming a topic of interest for their potential customers. The ultra mobile PC years are referenced as the ‘first coming.’ 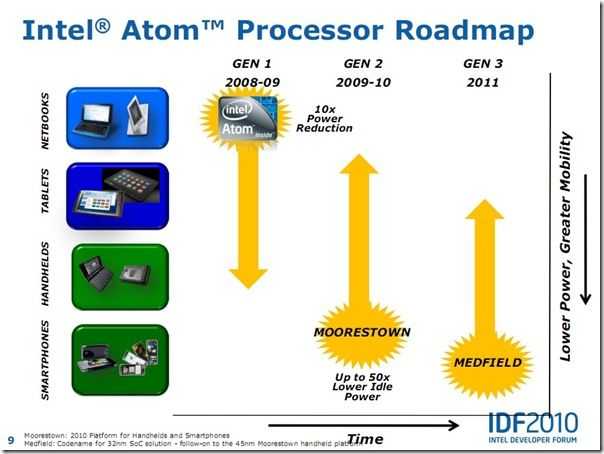 Here’s a diagram that shows where Moorestown would sit in terms of products. If I had drawn that slide I would have also included the ‘smart’ netbook segment. Moorestown is likely to scale up to processing power beyond the top of what ARM-based platforms can product right now and there’s a good opportunity to defend against the risk of ARM moving into that segment of the netbook market. (See tomorrows article ‘A Smart Netbook Image’ for more on that.) 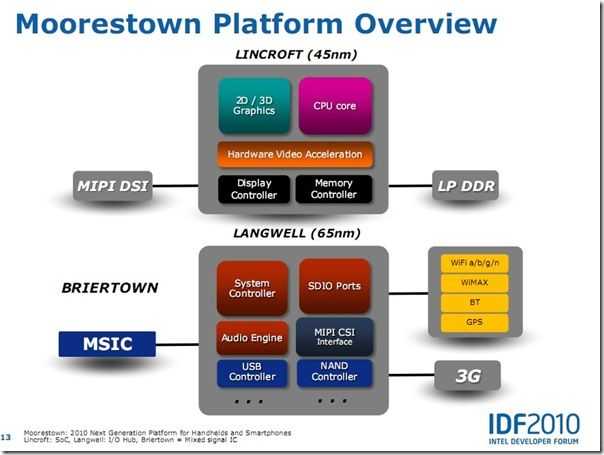 This is as much of the architecture as has been made public so far but thought leaks and discussions with engineers and developers we can say with some confidence that the graphics and hardware video acceleration is based on the GMA500 GPU (possibly clocked higher than on Menlow) and included 720p hardware encoding (for HD video recording.) The bus between Langwell and Lincroft is likely to be DMI (not PCIe) and as you can see, there are tightly coupled control and communications chips. Brierstown is responsible for power management. 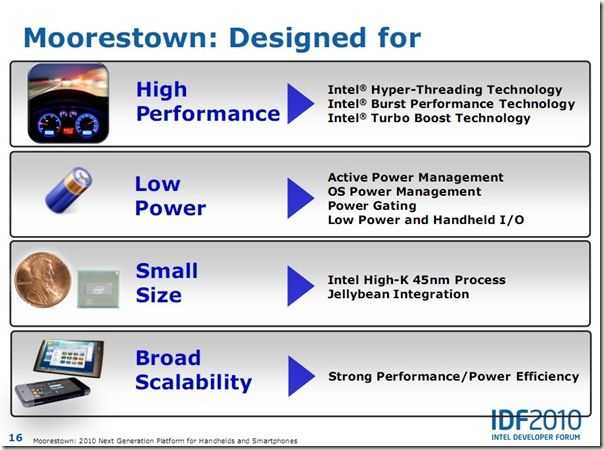 As with Tunnel Creek, the CPU includes hyperthreading which can boost effective performance. Burst (bus boost) and Turbo (cpu boost) technology is also included. Intel have previously said that the nominal clockrate is 600Mhz with boosting to 1.6Ghz although we suspect there will be different versions of Lincroft spanning smartphone to netbook applications. One of the most important features and something that sets Lincroft apart from  Tunnel Creek is ‘Power Gating’ which allows Moorestown to compete with high-end ARM-based smartphone platforms. It is this feature that is allowing the CPU to idle to 1/50th of the idle power we saw on Menlow.

More information on Power Gating in this article 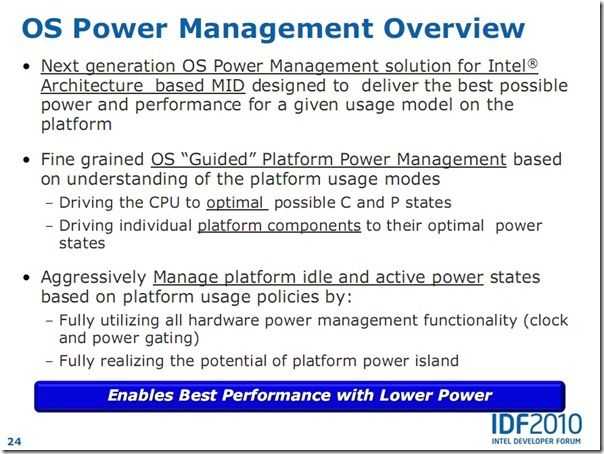 An interesting point from this slide is ‘OS Guided’ power management. What that means is that some of the power management features won’t work with Windows. MeeGo is the primary operating system for this platform and the two products are being developed side-by-side. Overall, we should see a 50% platform (not including screen backlight I assume) power reduction in average usage scenarios, and huge improvements in idle power drain. Overall it allows the platform to run in a similar power profile as high-end ARM-based solutions such as Tegra 2, Ti OMAP 34xx and Apples A4 solution.

The next public check-point for Intel will be Computex in Taiwan, June 2010 so unless Intel (or their customers) release information before then, we’ll have to wait a few months for more details. I’ll be in Taiwan for Computex so stay tuned for more coverage.

Note: Products are still planned for the second half of 2010. Two products have been announced. The LG GW990 smartphone and the Open Peek Media Phone.

Slides courtesy of Intel and available in the ‘Content Catalogue‘