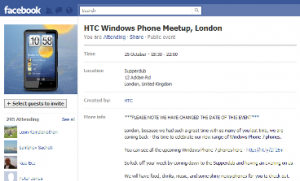 HTC expect nearly 300 guests including both fans and journalists and of their range of Windows Phone 7 devices will be on display, including the HTC HD7, the HTC 7 Pro, the HTC 7 Mozart, the HTC 7 Trophy and the HTC 7 Surround. Its going to be a great opportunity to get some hands on time with the new devices and report back on my initial thoughts and impressions.

If you are attending the event then make sure you come over and say hello.