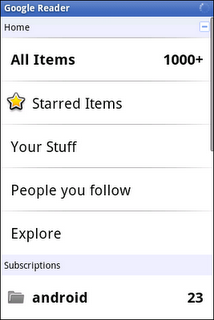 Sure, you’ve always been able to access an admittedly good Google Reader web app at www.google.com/i, but this web app was originally designed for iOS devices and, in fact, still uses graphics which are designed for older generation iOS devices, leaving them pixelated on modern iOS or Android devices. Not to mention that you don’t have access to some of the features that the native app now offers. 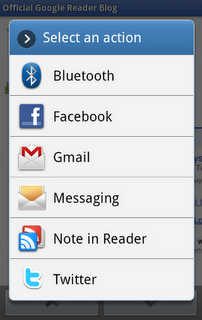 The Google Reader app will run on any Android device with Android 1.6 (Donut) or later, and includes many of the core functions that you can do with the desktop version that we’ve come to know and love. Most of your settings will sync between the two which is nice. Some of the features include:

Initial testing on the Samsung Continuum [tracking page] shows great core functionality. Speed is decent but I’m not quite sure if it’s as quick as the web version.

The only issue I’ve seen so far is that when you rotate between landscape and portrait orientations, the view is reset to the top of the current item. This is annoying if you decide to switch orientations in the middle of reading. Also for the time being there’s no way to get notifications which some will surely want, but if you follow a high volume of sites you’ll realize why this would only be bothersome. Still, I could see an update every 4 hours or so showing how many new items you’ve received being useful, but we’ll just have to wait and see if an update eventually brings such features.

If you can’t stand typing, hit up the barcode below with your Android phone to jump straight to the app in the Android Marketplace, or just search the Marketplace for â€œgoogle reader inch: 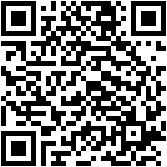