The iPhone Has Finally Come to Verizon, with a Catch. Why I’m Happy About the iPhone on Verizon as an AT&T Customer 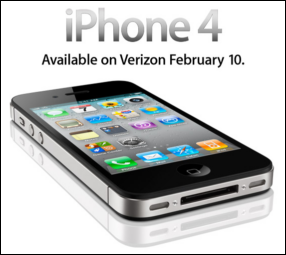 So today is the big day for people who have been predicting that Apple would launch a Verizon iPhone at every single Apple event since the original iPhone announcement in 2007. Nice work guys, your â€œpredictions inch came true 4 years later. For those who didn’t follow any of the live blogs, the Verizon iPhone 4 will be, for the most part, aesthetically identical to the AT&T version, and is priced the same. And while it’s still just the iPhone 4, there’s actually some advantages over the AT&T version. Engadget is pointing out that the Verizon iPhone has some slightly changed notches on the steel antenna band, which points to an antenna redesign. I think this is likely because Apple surely doesn’t want a repeat of â€œantenna-gate inch. Also, the Verizon iPhone 4 is going to feature Verizon’s mobile-hotspot which will let you share the device’s 3G CDMA connection to up to 5 other devices over WiFi (this feature comes with a costly monthly fee, of course). If you’re interested in the iPhone 4, you can order it from Verizon on February 10th, or if you’re a â€œqualified inch Verizon customer, you’ll be able to pre-order it on the 3rd of February.

One downside to the iPhone 4 on Verizon is actually one of the reasons that compelled Apple to go with AT&T in the first place. That is: Verizon’s CDMA technology doesn’t allow for simultaneous data and voice. I can’t tell you the number of times I’ve been on a call with someone on my iPhone 4 and also been referring to emails/attachments/websites/apps that were pertinent to the conversation. With Verizon’s iPhone, you’ll end up with a lot of â€œHey did you get that super important attachment? inch, â€œUhâ€¦. let me call you right back inch. Still, for those already on Verizon and who prefer it’s service to AT&T, a slightly compromised iPhone is better than no iPhone at all.

It’s about damn time that AT&T had some competition! The city in which I live must have the worst iPhone service ever. I’m lucky if I break 10kbps up and 5kbps down in some places. Thank the lord that there’s usually WiFi. With the iPhone now in Verizon’s hands, there will finally be competition for the best iPhone service, and AT&T is going to be forced to step up their game if they don’t want new cellular customers going straight to Verizon for the iPhone. After being recently called out by consumer reports as the worst carrier in the US, AT&T won’t be able to hide behind it’s claims of â€œNation’s fastest 3G network inch for long. I’d much rather have Verizon’s 3G reliability than AT&T’s 3G, which is fast in well covered rural areas, but horrendously slow in densely populated places. There’s finally someone to give AT&T the kick in the pants that it’s needed for several years.

There’s also FaceTime. More people with iPhone 4’s means more people with FaceTime, the simple to use — but so far under-deployed â€“  video calling service that’s built right into the iPhone 4 and latest generation iPod Touch. With more people having access to the service, it will become more widespread, which is always good for users. Still, it won’t be until the carriers feel that their networks are fast enough to remove the WiFi ball and chain from FaceTime that we really see it take off. And hey, what do you know, maybe this would be a good opening move for Verizon against AT&Tâ€¦ I love competition!

And furthermore, I’m glad that the iPhone 4 has come to Verizon because I don’t have to listen to the same Apple rumor over and over! Four years was long enough. Now that the iPhone is on Verizon and the iPad has been released, the Apple rumor mill will have to devote it’s attention to something else. I just hope I’m not hearing about touchscreen iMacs for the next four yearsâ€¦.