As phone / PC combos go, this Fujitsu F-07C is definitely the smallest I’ve ever seen. It’s also the smallest PC I’ve ever seen.
A 1.2Ghz Atom, 1.0GB of RAM and 32GB of storage sounds like it could work as we’ve seen similar set-ups in the past. 1024*600 screen resolution is ok too. You’ve got a slide-out keyboard, Wi-Fi and a docking port and a local RRP of $850. Sounds exciting. 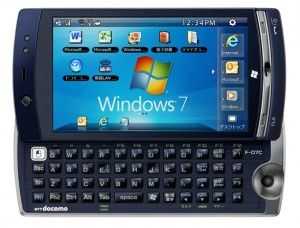 I’m a little confused though. Fujitsu know what it takes to make a ultra mobile PC so they should know that a 4″ screen makes Windows nearly unusable at any resolution and that a 2hr battery life doesn’t impress anyone. I wonder what the target market here is.

Hot-desking Japanese execs come to mind but there’s probably another reason. Win7 provides good encryption so perhaps this was built as a secure storage device? Perhaps its main purpose is to be docked and used with screen, keyboard and mouse. I suspect there’s a big customer involved somewhere here. I mean, UMPCs are niche but this looks to be extremely

Take a look at the thread running on another pc/phone article (Magic W3) from last week. There’s interesting information about a possible 600Mhz clock speed (that would be another stumbling block,) the impressive 1.3W TDP X86 platform and the expected price.

What do you think? Personally I think it will be an interesting test for Oaktrail but you have to wonder why Fujitsu partnered a Ti OMAP platform with the Oaktrail platform when Intel, theoretically, have one phone platform in production and another one due at the end of the year.