There IS Innovation in the Tablet Market; Even if There Wasnâ€™t, Grid is Not the Answer

Yesterday the company behind the infamous Joojoo, Fusion Garage, revealed itself as the real name behind the fake company TabCo which had been teasing the tech world for the last few weeks about an upcoming tablet.

During the announcement webcast, Fusion Garage did indeed reveal a new tablet which turned out to be the Grid 10 device that we saw pass through the FCC a few weeks back (though at the time we didn’t know it had anything to do with TabCo). You can find full specs, links, photos, and more at the Grid 10 tracking page in our mobile device database.

In a genuine surprise, Fusion Garage released not only the Grid 10, but also a smartphone called the Grid 4. The Grid 4 is quite thin at 9.6mm. You can also find full specs and plenty more for the Grid 4 in our database.

Both of these devices run Fusion Garage’s own ‘Grid’ OS which is not Android, but is based on the Android kernel. Grid will be able to run Android applications natively, but neither of the devices will have official access to the Android Market, nor will they have the usual Google applications that you find on an Android device, like YouTube, Gmail, Maps, etc. To compensate for this, both will come pre-installed with the Amazon App Store as well as Fusion Garage’s own Grid application store.

Devices aside, I can’t help but comment on some of the remarks that Fusion Garage made during their webcast.

According to Fusion Garage’s CEO, Chandra Rathakrishna, Apple’s iPad is the only real tablet in town, while Android tablets offer nothing but â€œparody inch. Specifically, Chandra said that there is no innovation in the Android tablet market and that companies out there are offering nothing but sameness. He also went on record as saying that Fusion Garage would change that, that the market needs a â€œshakeout inch.

I have to wholeheartedly disagree with Chandra’s remarks. Not only is there innovation in the Android tablet market, but even if there wasn’t, Grid is not the answer.

If anything, Apple has been the stagnant one in the tablet field thus far. Sure, they may have arguably started the market, but they’ve added very little to their initial iPad offering. Don’t get me wrong, the iPad is certainly a good product, but between the iPad and iPad 2, there isn’t much except for an increase in speed, reduction of weight and girth, and some cameras. That’s not innovation, it’s just improving on what’s already there.

Meanwhile, some rather brave companies have been experimenting in the Android tablet field with features and functions that Apple simply doesn’t offer with the iPad at this point.

Look at Asus. Their Eee Pad Transformer, which docks to a keyboard and can then be folded closed like a netbook, has been very well received in the market, and is empowering people to use their tablet in situations where they otherwise wouldn’t. They’ve also got that excellent looking Eee Pad Slider launching soon, which keeps the keyboard hidden away under the screen when you don’t want it, and they’ve thrown in a full-sized USB port for connecting useful peripherals like a flash drive or mouse.

And it doesn’t stop there.

Have a look at the HTC Flyer, the first Android tablet equipped with an active digitizer for serious digital inking. Then there’s the ThinkPad Tablet which seems to combine functions of the Transformer with the Flyer by offering a dockable folio with full keyboard and mouse, which folds down like a netbook, as well as an active digitizer for digital inking and notetaking.

Not to say that these devices have been or will be smash hits, but these companies are experimenting and innovating, and producing devices that are all stepping stones toward more productive and useful devices that can be used in scenarios where the iPad (and the Grid 10 for that matter) cannot.

I hate to put down Fusion Garage; they’re a company of around only 100 people, and have limited funding compared to the likes of Apple and Google. I appreciate their vision, but I don’t think they’ve been realistic about what they can accomplish.

In the webcast, they offered their Grid OS as the cure to their perceived sense of sameness that they say is found in the Android tablet market, but from their own demonstrations, they’ve done nothing but offer up different (not new) ways of doing the same old things.

During their demonstration of the Grid OS, I saw lots of eye-candy and even some cool visual design, but little in the way of intuitiveness. The home screen, for instance, works like a big open canvas where you can place all of your apps. The area is so far zoomed in that there is actually a map at the top right of the screen to indicate where you are on the home screen. I’m sorry Fusion Garage, but if the homescreen of your device requires a map to be used effectively, you’ve failed on ease-of-use: 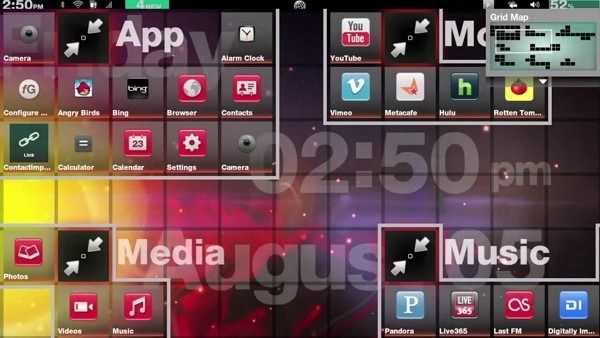 I hesitate to even start talking about the â€œ3D tilt inch that they’re so proud of. They’ve got this scrolling animation that slightly tilts the list that you’re scrolling through. Listen to how they laud it on their site without even saying how it’s beneficial:

â€œHave a big video collection? Scroll through it quickly with Grid10’s 3D tilt. Scrolling through your collection has never looked better. inch

I’m sorry FG, but tilting the thumbnails on a list by 5 degrees or so as I scroll doesn’t not make my movie collection look any better than if it just scrolled with no tilting.

The problem with â€œ3D tilt inch is that it does nothing but distract visually. It doesn’t help you find anything in the list any easier than if it didn’t tilt. It isn’t even there to indicate the direction of motion as that’s already accomplished with a non-tilting scrolling list. It’s pure eye-candy, and I’ve got a major problem with that. It’s like giving a race car curves to make it look cool instead of being aerodynamic — it’s flair with no function. You can see their silly 3D tilt effect here (and notice how you’re never really certain what part of the interface is going to pop our of where lack of intuitiveness!):

Then there’s their video controls that we â€œhaven’t seen anything like inch which are just your basic video controls, which they managed to make more intrusive than putting the seek bar across the top or bottom of the screen like everyone else: 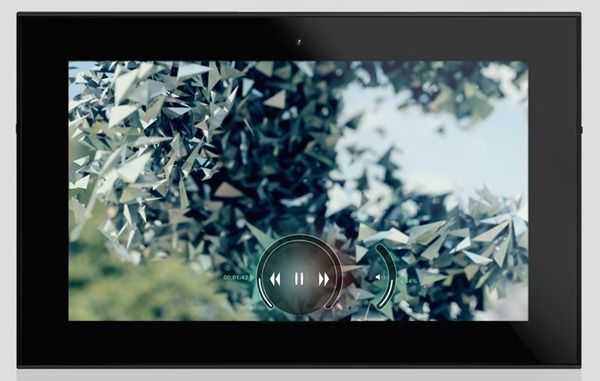 The Grid interface isn’t the only thing with needless eye-candy. Fusion Garage’s entire presentation showed me little but wasted money. A small company doesn’t need to put on a big press event and parade around with an Apple costume on people get this. But here is Fusion Garage, wasting money by building a big stage with moving parts for a virtual audience, and trying desperately to be like Apple or Google, even if people wouldn’t mind if they were just themselves.

I actually chortled to myself when they announced Grid; lights flared, and a big metal lattice with some squares bearing the â€œGrid inch name lazily slid in from both sides of the stage. Once they stopped moving, Chandra said â€œSo people, there you have it, Grid. inch Much like 3D tilt, this was just eye-candy for the sake of it. There was absolutely no reason to waste money on fabricating and moving the stage like that. You can see the laughable spectacle here. I dare not even get started talking about the dub-stepâ€¦.

All the while, on the screen behind Chandra, you could watch a bunch of unnecessarily animated (and visually distracting *cough*3D tilt*cough) slides playing. Waste waste waste. Save that money and put it toward HCI testing.

The Grid OS showcases no new ideas but instead is just a whole new unintuitive operating system that they’re asking people to learn from the ground up. Not only that, but Grid brings along with it the disadvantage of not having official Android Market access, and missing out on some of the key apps that make the Android platform so useful. The ability to run Android apps natively is merely a crutch, as they won’t share the same interface design as the core Grid apps and those from the Grid application store.

Fusion Garage has not demonstrated anything revolutionary or innovative that I’ve seen. They’ve only introduced different ways to do things that we already do without issue on other mobile operating systems.

The Grid 10 is what the Joojoo should have been an impressive product, for a small company, but nothing that’s going to take off.