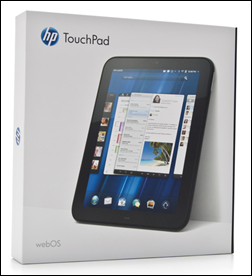 I was literally in bed when I caught wind of this, and now I’m sparing myself a few additional minutes of rest to bring you this news right away (no, I didn’t have time to get dressed â€“ yes, this is that urgent). Our favorite deal-a-day site, Woot.com, has the HP TouchPad for just $379.

Why is it important that you be the first to know? Because Woot offers a deal on one single item every day, and that means that come tomorrow, this deal will be history. Furthermore, they’ve only got a limited (and unannounced) stock, so it could sell out before tomorrow even rolls around.

This is a brand new unit packing a dual-core 1.2GHz Qualcomm Snapdragon APQ8060 CPU. It’s the WiFi only version of the device and it comes with 16GB of memory built-in. Here’s what comes in the box:

You can check out all of the HP TouchPad specs in our device database before considering the purchase.

The $379 price tag only beats what you’ll find on Amazon or direct from HP by $20 right now, but, that’s because HP is currently offering $100 off of the TouchPad from August 5th-7th. Once this period is over, HP and Amazon will go back to charging $499 for the 16GB WiFi-only TouchPad, which makes Woot’s deal that much better.

Though the TouchPad initially launched to some rough reviews, a recent update has brought it up to a more respectable level of performance.

Not long after the launch of the WiFi-only unit, HP announced a ‘4G’ version of the device for use on AT&T’s network. This version includes a higher clock on the CPU, which brings it up to 1.5GHz. HP has been unclear whether or not they would bump the speed on the WiFi-only units through a software update or a hardware change at some point down the road.