If a slide leaked to Neowin is genuine, Dell is working on an XPS 12 Ultrabook which will feature the same convertible functionality as the Inspiron Duo.

Last week we highlighted some comments from CEO Michael Dell which seemed to indicate that the company is readying a touchscreen Ultrabook in anticipation of the Windows 8 launch. Given this leaked slide from Neowin, the evidence seems to be stacking up in favor of a convertible touchscreen Ultrabook from Dell. 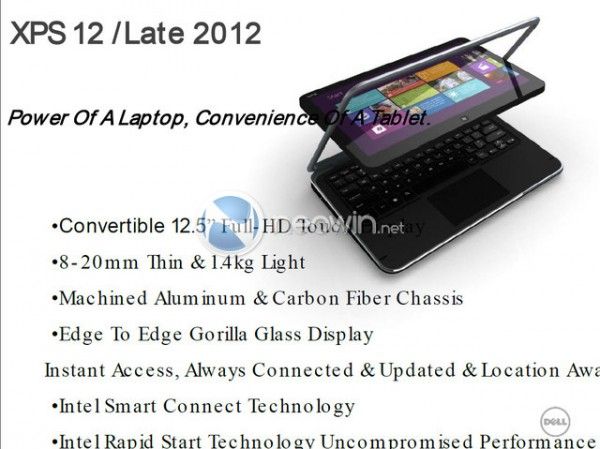 The atrocious formatting of the slide makes us immediately skeptical of its authenticity, but Neowin claims that it is from a proven source. According to the slide, the Ultrabook in reference is called the XPS 12 and features the following:

From what we’re seeing on the slide, the XPS 12 fits Intel’s Ultrabook definition correctly. Even though the formatting of the slide is awful, the features sound right and the inclusion of “edge to edge” glass is a significant detail that is important to Metro; a faked slide probably would have missed this.

Note also in the photo that the XPS 12 appears to have a ‘Windows button’ at the bottom of the bezel. It could just be a logo, but why else would Dell put a Windows logo on the front of their device!

There’s no release date or pricing info yet available for the XPS 12, but if we’re lucky we might see this one at Computex next week! Stay tuned.