It’s raining again, Ultrabooks that is. IFA has kicked off and ASUS has just presented a huge range of new devices.  The Ultrabook, or Ultrabook-like devices we’re checking out are the ASUSPro BU400, the ASUS S6, ASUS Zenbook U500 and ASUS U38 touchscreen laptop. 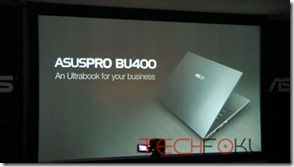 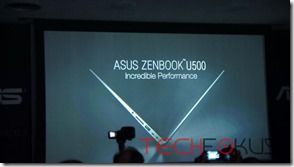 These images are from Techfokus.de who were live blogging the event and are now uploading videos. Here’s the information we have at the moment (being updated)

Business-oriented Ultrabook at 1.64 KG. Full set of ports with obvious focus on touchpad and keyboard quality. anti-glare HD/HD+ displays (options we assume) and..touchscreen. Spill resistant keyboard and reinforced carbon construction. This is a VPro-enabled ‘Ultrabook for Business’. Encrypted hard drive, TPM module and Fingerprint reader are included. We’ll leave you to guess the starting price for this one!

A ‘value’ Ultrabook which includes an optical drive. High end models will include a Nvidia GeForce 635M. Hybrid HDD. 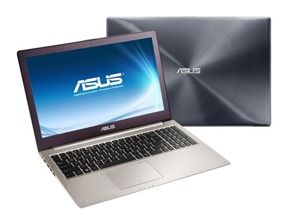 It’s not clear if this is a true Ultrabook at the moment but it looks like one! 15” IPS display, focus on style and includes an Nvidia Geforce GT650M. Bang and Olufsen sound with ‘four times the sound output’ of other ultra portables.  It’s offering an extra 25% (undefined) battery life in ‘green’ mode. Dual SSD’s will provide up to 512GB of storage. [Engadget have the press release]

AndandTech have some official info and pics here and reveal that it’s a quad-core Ultrabook. Really? A quad core Ultrabook? This is an interesting development for the Ultrabook platform if it’s true but seeing as ASUS don’t mention the word Ultrabook…

It looks like this one is targeted as a mainstream touch-capable ultra-light. Full HD display.

Rather than copy all the images from Techfokus we encourage you to head on over there while we dig around for full specs and press images for this line-up.

I know some of you are going to be very excited about this. An 11.6”-er with Windows 8 and touch. Up to 256GB SSD, Super IPS+ screen. We had info on this back at Computex. Check it out.

This video from the press conference has just been uploaded. Note that Asus are referring to this as a convertible Ultrabook. The Transformer Book will be available in 11.6, 13 and 14@ versions with full HD IPS display, a backlit keyboard and comes with two USB3.0 ports. Core i3, i5 and i7 options are being talked about. A 5MP camera in the rear, 1.3MP in the front. Ambient light sensor is included for auto-brightness and it’s fitted with high-end audio and speakers.