In collaboration with students a team evaluated tablet solutions and Ultrabook solutions including the Samsung slates and Ultrabooks. Issues with battery life and flexibility led the team to the Lenovo Helix with its digitizer and dual battery configuration.

“Each year we have a pretty rigorous Request for Proposals  process that starts in the Fall with discussions with Intel about their processor roadmap.  We release our RFP in December and get first responses in January.  We narrow our field down to two or three vendors we invite back for on campus demos in February and we try and make our selection in March.” said Stephen Landry, Chief Information Officer via email. 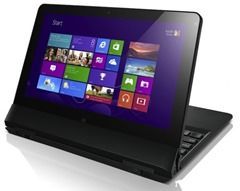 The university has been using tablets and convertibles since 2007. One Note and Dyknow feature as common applications and recent hardware has included Lenovo X-Series devices.  The Samsung Series 7 Slate was deployed to students in 2011 and feedback was mixed. While a majority of Juniors reported satisfaction with the tablet, a small majority of freshmen reported that they would prefer a traditional form factor hence the move to a hybrid solution.

If our search traffic is anything to go by, the Lenovo Helix is a device that a lot of people are researching right now. Similar to the Fujitsu Q702 that we reviewed recently it offers almost the best of many worlds in terms of Ultrabook performance, laptop form-factor and digitizer slate working. Lenovo has already revealed that the slate component down-clocks to preserve a 10W TDP figure for the CPU so don’t expect the same performance as a Microsoft Surface Pro when used in slate mode but an innovative fan system in the base allows the unit to ramp-up to full power when docked. Battery life should be impressive given the dual battery solution.

Clearly the Helix is in production now so although customers ordering a potential 2000 units are going to get some priority we’re’ expecting general channels to get the Helix soon. It looks like some channels are already being stocked and we’ve a good video review for you to check out. It’s positive!

We’re obviously trying to get hold of a Lenovo Helix for review as soon as we can and obviously we’ll be checking in with Seton Hall again to see how they get on. In the meantime, keep an eye on the product information page for links and updates.