Intel are introducing new Core M SoC variants. All have higher base clockrates on the CPU and GPU which indicates that the quality emerging from the Core M production process is increasing. That means yields for the low-end Core M models are increasing and that ultimately, prices can start to trend down. The new SKUs are: Core M-5Y10c, Core M-5Y31, Core M-5Y51 and the Core M-5Y71.

See a list of Core M PC’s in our database here. 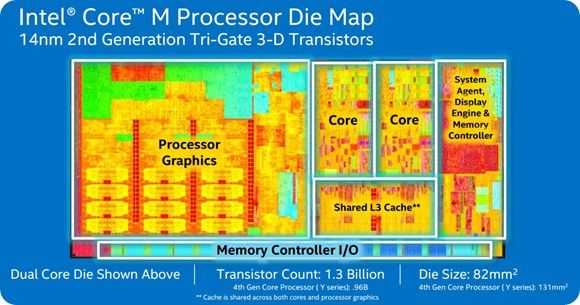 All new models have the same 4.5W base TDP but, for consumers, the performance of a Core M under normal conditions is going to depend on internal thermal ‘headroom.’ In fact the TDP figure is largely useless now due to burst TDP and configurations that can increase or increase the TDP.

Core M is available in a number of PCs already (we keep a list of Core M mobile PCs here) and inital feedback is that it’s not quite as good in these products as we saw in demonstrations at IDF in September. The Lenovo Yoga 3 Pro offers class leading thickness and weight for a 2-in-1 but performance sits somewhere between Atom and the performance seen in Ultrabooks. Some products are including eMMC storage too.

The 14nm ‘y-series’ Broadwell SoC is a big help to PC designers that want to offer think designs at light weight and we see it evolving into Celeron and Pentium branded designs for fanless low-cost laptops and Chromebooks during 2015.