The lab-rats at Notebookcheck have just published their full review of the Dell Latitude 7350. This 1.6KG 13-inch device isn’t ultra-mobile but we’ve put it our database as we’re implementing a strict 1.3KG minimum operating weight limit. This is a 2-in-1 detachable with a 13-inch fanless tablet that weighs just 860 grams. There’s also something important inside that we need to know about – the Core M 5Y10. It’s also a 2-in-1 which means you can use the tablet on its own. It weighs 860 grams (1.9 pounds) which is OK for a 13.3-inch Core-based fanless tablet. 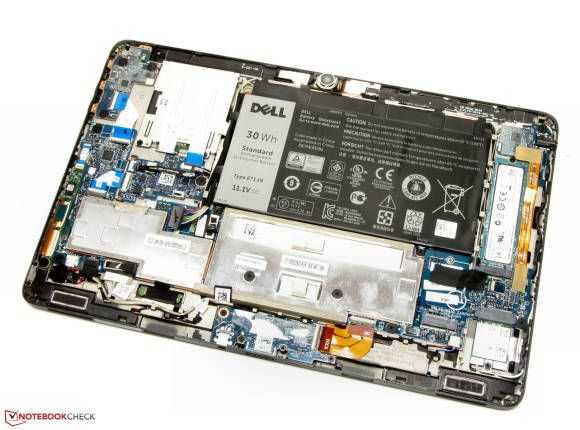 The Dell Latitude 7350 is business-focused and priced at well over $1000 with entry-level specifications. There’s a split battery (30Wh in tablet, optional 20Wh in dock) and a large number of features and options including ExpressCharge, LTE, VPro and the like. Dell calls it an Ultrabook but with Core M inside, we’re not. Here’s why.

Core M, at best, when the gods of heat and cooling are on your side, performs as well as a Haswell-generation (2014) Core i5 but there’s a huge range of throttling that can kick-in when things warm up. A theoretical maximum clockrate of 2.0Ghz is impressive but the base clock is just 800Mhz.

Notebookcheck, a site I do reviews for, has a strict process when it comes to reviews so when I see their performance test results I take note. They’ve just published the full review for the Dell Latitude 7350 (Core M 5y10, 4GB RAM) and the limits of Core M are clear to see.

The Cinebench Single-Thread tests show that the CPU can maintain a clock of 2 GHz while the Multi-Thread tests are executed with 1.3 up to 1.4 GHz. This behavior is identical for mains as well as battery power. According to the benchmark results, the single-thread performance is between the ULV Core i3 and ULV Core i5 processors of the Haswell generation, but the Core M is beaten by Core i3 processors in multi-thread applications because it cannot utilize its maximum performance.

Have a look at the Sunspider, Cinebench and Peacekeeper scores on the Notebookcheck review and you’ll see sub-Ultrabook performance, at least where 2014 Ultrabooks are concerned. What the Dell Latitude 7350 does bring is 2012-era Ultrabook performance in a fanless design and that’s worth thinking about when it comes to tablets.

In terms of battery life the Dell Latitude XPS 13 does quite well on the 50Wh battery configuration when compared to Haswell-based devices but again note that under load, the Core M CPU won’t be getting as much done as a Core i5 Haswell-generation. The web-browsing performance is a good comparison to use though and here we see the 50Wh battery giving 522 minutes of battery life. Again, web page loads may not be as fast as on a Core i5 but the small delay is probably not going to concern most users.  The average power usage in the web browsing scenario is 5.7W which is slightly higher than I’ve seen on 10 and 11.6-inch Core-based laptops. Again the screen backlight takes more power for the same brightness on a larger screen compared to a smaller screen.

So what can we learn from this Core M product test? Firstly we have to bear in mind that this is a single reference point form a single device. Core M performance relies heavily on good thermal design and benchmarks will vary a lot across different testing scenarios. Even a few degrees increase in ambient temperature will affect results. Benchmarks themselves can heat up a device such that the following benchmark can be negatively affected and you can see that in the sequence of Cinebench tests done on the ASUS UX305 by Ultrabookreview.  In that review the Cinebench result varies from 140 down to 107 points. In the Notebookcheck review of the Dell Latitude 7350 the CPU score is 139 points. In a full review of the HP Envy X2 15 c000ng, another fanless Core M 5Y10 device, the max Cinebench R15 score is 167 points.  Incidentally the Core M 5Y70 (1.1Ghz base clock) as seen in the Lenovo Yoga 3 Pro (which has a fan) is reaching over 170 points on this CPU-only test.

Core M is difficult to test but I believe that the results you see here are representative of a fanless Core M device and although performance isn’t as good as an Ultrabook, Core M is allowing lightweight fanless PCs in the 1KG-class with performance that we’ve never seen before. This brings ‘enough for everything’ and with the Lenovo Yoga 11, Acer Switch 12 and ASUS Transformer Book T300 Chi coming with Core M at the $700 price point there’s value in the equation too.

All Core M mobile PCs in our database can be found on this page.