The Vaio Z Canvas 12 is an amazing bit of engineering. It’s a 1.2 KG / 2.66 pound tablet with stand and keyboard cover which doesn’t sound like anything different…until you learn that this beast will run a K-series quad-core 47 W  Haswell processor. Holy smoking tablets Batman!

The money shot. Check out those fans! 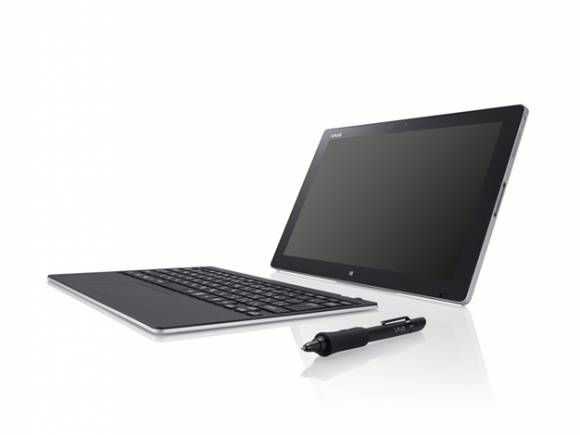 I missed the announcement that this is coming to the USA but was tipped-off on it at IFA last week by someone who showed me a 3 KG beast of a convertible laptop prototype running an even higher-end CPU / GPU setup. Aimed at professional creators it’s got around 6 times the CPU power of a 4th Gen Core Ultrabook. Mobile videos editors and professional photographers need to be aware of this unique tablet PC.

The quad-core, hyperthreading-enabled Core i7-4770HQ processor has a TDP of 45 W which explains the triple-fan and heat-pipe arrangement inside. An Iris Pro 5200 GPU sits alongside.

A 63Wh battery will help keep things moving along when you’re not near the mains power but don’t stay away for too long! Sony claim around 6-7 hours battery life but please note that this is a lonw-end JEITA test result. Rendering videos on this is going bring it down way below that, although that’s going to be an extremely productive time.

The port selection is extensive and the LAN port hints at where you’ll probably use the Canvas the most…on a desk, probably with the power cable attached too.

And the price? It was available under the Sony Vaio brand in Japan for a pre-tax converted price of US$2000 but the USA model , which will be running Windows 10, doesn’t have a price yet. It’s still got the Haswell CPU though which is a shame as that it just turned ‘2.’  Availability is ‘fall’ 2015, which is right round the corner.

Mobilegeeks had a hands-on with the Vaio Z Canvas at Computex earlier this year so take a look below.

The Vaio Z Canvas is going to be king-of-tablets when it launches in the USA so if you think a Surface Pro 4 won’t satisfy your requirements, keep an eye out for this one.