Apple Contradicts Itself and Puts Me in a Rough Spot With iPhone 4 Antenna Conundrum, Has Me Looking for a New Handset

You’ve likely heard of the iPhone 4 antenna debacle and saw coverage of the recent press conference that Apple held on the issue. Well, as an iPhone 4 owner, I’m quite bothered by what’s going on and the way that Apple has acted toward this issue.

First of all, Apple has contradicted itself over the antenna dilemma. Prior to Apple’s July 16th press conference, Bloomberg ran an article titled â€œApple Engineer Told Jobs iPhone Antenna Might Cut Calls inch which purported that a senior engineer at Apple had warned Jobs about the possibility of the antenna design could lead to dropped calls.

When someone brought up that Bloomberg article during the Q&A part of Apple’s July 16th press conference, this is what was said, according to Engadget’s live blog of the event:

Q: Were you told about the design before the phone was released?

Steve: Are you talking about the Bloomberg article? That’s a crock, and we’ve challenged them to show proof of that. If anyone had said this thing has problems, we would have dispatched people to deal with that issue. [my emphasis]

So Apple says that reports that they were warned about the antenna design beforehand were false. With that in mind, see this quote from Steve Jobs at an earlier point in the same press conference (the time is marked if you’d like to watch it for yourself):

This statements seem to be rather conflicting. And it isn’t just that. At the opening of the press conference, Jobs explained what the press was reporting about the issue, and said that it had been dubbed â€œantennagate inch. Just at the end of the conference, jobs had this to say:

However, earlier in the conference he very clearly stated the following:

â€œWhen our engineers and scientists look at this data, it’s very hard to escape the conclusion that there is a problem, but that that problem is affecting a very small percentage of users. inch â€“ (23:28) [my emphasis]

So, to paraphrase the above, Apple says â€œNo one within Apple warned us about any antenna problem as Bloomberg reported inch then goes on to say â€œWe knew about this issue, but didn’t think it’d be a problem. inch And furthermore, â€œThere is no issue (antennagate), but looking at the data, its hard to escape the conclusion that there is one inch.

Anyone else have a problem with what’s been said here? And mind you, these aren’t out of context quotes from various statements that were weeks apart. No, this is all from a single, orchestrated, Apple press conference.

Moving onâ€¦. Apple says this issue is affecting only a small number of users. Well I happen to be one of those users and I was expecting a working phone when I bought it. I upgraded from Apple’s iPhone 3GS and quickly began noticing that my iPhone 4 dropped calls more frequently and more easily than my iPhone 3GS. Steve said his pet theory was that many people had cases when they went from the iPhone 3G to the 3GS, so the antenna issue was already fixed. Well I never owned a case for my iPhone 3G or my iPhone 3GS, and yet, there is a noticeable and frustrating increase in dropped calls since

I’ve started using the iPhone 4. I was even noticing more dropped calls early on when I thought people were just jumping to conclusions over the antenna issue.

I’m an affected user, but Apple wants to make every user happy, according to Jobs. So I take my phone to the genius bar at the Apple store; I have three issues:

So what does Apple do to make me ‘happy’?

All I really want is to swap out my iPhone 4 for another iPhone 4 and see if I still have the same problems. Apple says they’d be happy to do that for me, but they can’t take a phone from the Genius Bar stock, instead they have to take it from sale stock, which is empty, and there likely won’t have any before my 30 day return window is long gone (it ends on the 23rd of July â€“ 3 days from now).

Ok so Apple says if I’m still not happy, I can return the phone for a refund. They promise me a free case, but they can’t get it to me until after my 30 day return period is closed. What if I wait for the case and I’m still having issues? Will Apple claim that that’s just how all smartphones are and not do anything to fix the problem?

All of this has me seriously considering the Samsung Captivate which I played with very briefly in an AT&T store today, it felt snappy, and if I can return the iPhone and get my upgrade eligibility back, I’ll be able to pick up the Captivate for $100 less than I paid for the iPhone 4. Tempting. 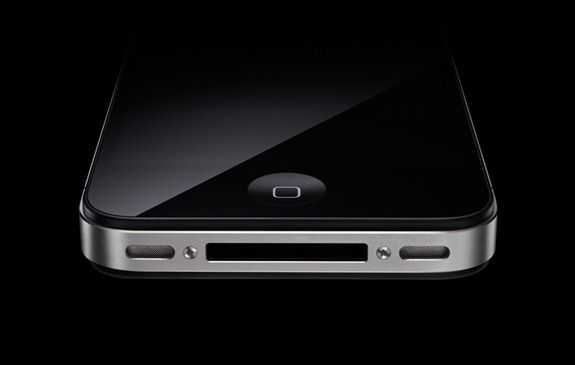 After saying that all phones experience the issue, Apple thought that the issue lay with a software bug that was causing bars to be incorrectly displayed, and indeed they were. AnandTech has done some thorough testing which revealed the skewed representations of the bars (each bar didn’t represent the same amount of signal). Apple, today, released an update from iOS 4.0 to 4.0.1 for users of the iPhone 3G, iPhone 3GS, and iPhone 4 which corrected the bar formula, and increased the size of the first three bars. I suppose Jobs figured we just couldn’t see them even though they were there, thanks to the blinding holy light that the “retina” display emits.

Fast forward a few days and Consumer Reports… er… reports that the iPhone 4’s reception issues are indeed hardware related, though this was also confirmed by a number of other places and should have been very obvious to anyone using the phone. In my own testing, WiFi was clearly affected based on grip, showing that the problem certainly isn’t cause by a bug that altered how reception bars were being displayed.

I upgraded my own iPhone 3GS to the iPhone 4 and immediately began noticing worse call quality and a vast increase in dropped calls. I rarely ever dropped calls in my area with the iPhone 3GS and suddenly calls started dropping like crazy once I upgraded to the iPhone 4. It’s almost embarrassing to have a “phone” that some people are billing as the best in the world that is actually awful at the whole “phone” part. It’s one thing to simply hold your phone and watch the bars drop and say “I have this issue”. It’s another entirely to be trying to give someone important driving directions and have the call dropped outright, as has happened to me and it is rather frustrating.

It has been widely suggested that Apple issue free “bumper” cases to iPhone 4 users to fix the issue, as reports indicate that using various cases, which prevent contact with your hand and the sensitive part of the phone, prevents the problem from happening.

Beyond the reception issues is the lurking proximity sensor problem. While not as frequently cited as the antenna problems, the proximity sensor may be compounding the issue. Before I noticed the reception problems, I found many calls had been dropped without the familiar “Call Failed” screen that generally pops up when calls are dropped. Instead, I’d be talking on the phone with someone one minute, then suddenly they’d stop talking. I’d ask if anyone was still there, and upon not hearing a response, I’d look at my iPhone’s screen to see my Favorites screen (a “quick call” list, if you will) staring right back at me. I can’t be 100% sure, but it seemed very much as though I had accidentally hit the End Call button with my face while on the phone. I’ve had this happen several times and quite hilariously, it happened today while I was in the middle of setting up an appointment with an Apple store to look into my phone’s proximity problems.. Hopefully Apple recognizes both issues and will be able to nail two birds with one stone tomorrow.