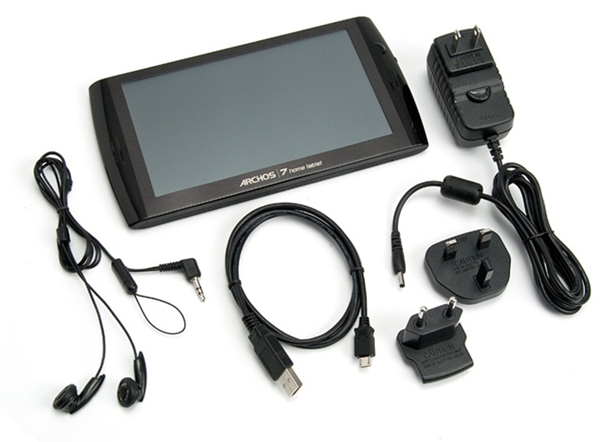 News flash! Woot.com is throwing out the Archos 7 tablet out for an amazing $79.99.

Ok, the truth is that you’re not buying the best of breed tablet â€“ this is a refurbished 7 inch (800×480 resolution) WiFi enabled tablet that comes with an old Android 1.6  operating system . The screen is resistive meaning that the touch screen is not going to be responsive to finger action so you will end up pecking with your fingertips instead.

It also runs an old 600Mhz Rockchip processor which is very slow when compared with the current tablets running Tegra2 1Ghz but if using the Archos mostly for audio, video,  eBook reading (ie, not a lot of finger to screen interaction), and basic web browsing  sans Adobe Flash, then this device will suit you.

Also note that also doesn’t give you the fancy accelerometer (meaning no auto-rotation of the screen), in-built GPS, Bluetooth connectivity or any video output capabilities that most of us take for granted on the most expensive Android tablets these days.

The Archos 7 does comes with some good features though â€“ it has a mini USB2.0 interface which allows the tablet to be presented as a mass storage device to the PC for convenient file transfer and also has a kickstand which allows it to be propped up for easy screen viewing. Video playback is around 7 hours.

It comes with 8GB storage and give you the option of expanding more memory via the micro SDHC slot.

I reckon this is a great economical entry tablet for those of you that are looking to dip your feet into the Android tablet waters or looking for a good mobile multimedia entertainment companion.

As usual, remember that Woot.com is a deal a day, so if you’re interested, best to hurry down to their website today before the deal is gone, or before they sell out of stock! 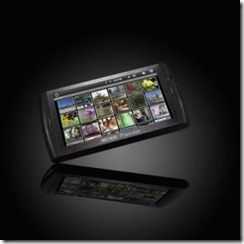 My apologies to anyone who got excited when we posted our last article about Archos 7 Home Tablet availability. It turned out to be, as we suspected, a trick by an online retailer. (Mental note: Never link to these chancers again!)

In a U.S. press release last week (PDF), Archos announced that the Tablet will be available mid-May.

The ARCHOS 7 home tablet will be available in June at $199.99 SRP through selected
retailers. Exclusive pre-orders are available at Amazon.com, with product shipping mid May.

Review devices have obviously gone out. Engadget have one for testing and UK newspaper The Independent has its mini review up already.

I’m getting the impression that the Archos 7 Home Tablet is going to be a bubble-wrapped tablet hanging on hooks at point of sale. Android 1.5 (really?) is on board and apparently there’s no plan to upgrade the OS. Built-in USB 2.0 helps for attaching accessories and apparently the stereo speakers are good enough for in-crowd use. Touchscreen quality sounds just like the Archos 5 â€“ resistive.

When it comes to the touch screen browsing don’t expect an iPad-like experience. There is no multi-touch support and the onscreen input often felt slow and unresponsive. There is also no support for Flash.

At 149 Euro for the 2GB model, if it provides a acceptable HQ video experience along with ereading, basic web browsing and audio, it’s good value and could make the perfect online Google Reader device but please don’t expect a swift web experience, rich video experience and anything like an iPad UI experience. 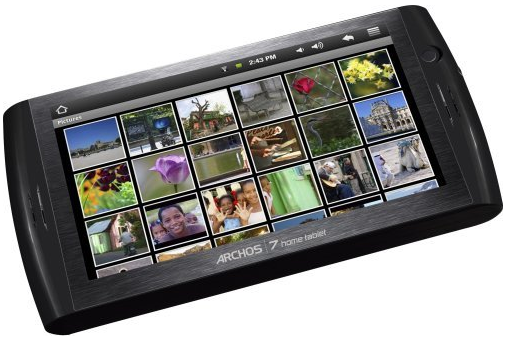 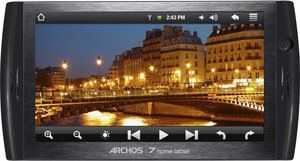 $499 too much for your next gadget purchase? Closed iPhone OS not quite your cup of tea? Looking for digital video output, video recording, micro-SD slot, USB (host and slave) capability and portability with a high-end processor?  I can’t say that the Archos 5 is as slick as an Apple iPad or iPod Touch but it’s a damn good product. 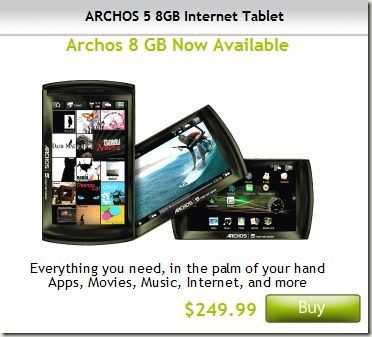 The Archos 5 8GB is now available in the US Archos store. We’ve also heard that EU versions will be shipping soon too so for some sub $250 pad action, this comes highly recommended. [Full review here]  If you prefer RadioShack, it’s also in stock there.

If you’re looking for something a bit larger though, the 7 inch version of this is, to all intents and purposes, confirmed. (See comments on this post.) We’re expecting Archos to announce this soon and wouldn’t be surprised to see a 3G version of the Internet Tablets too. Would 512MB RAM and a full Google-approved Android build be too much to ask for too? Stick a slider keyboard and 3G on a 512MB Google Android version and I’m sure a lot more people would be happy! 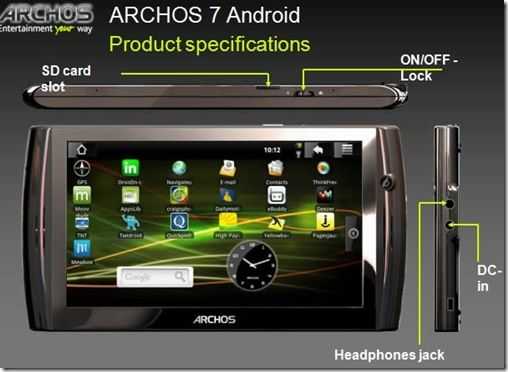 Thx to grnxf and Chris Street who commented on this post. The Archos 5 Internet Tablet is already a great bit of kit but if you’re looking something a little bit bigger, more sofa friendly and with a few more features a 7” version makes sense.

Data-mind.co.uk, a wholesale distributer for Archos products has a new Archos 7 Android listed in their catalogue for an amazing 127.65 UK Pounds. (Trade price, before tax = about 200-250 pounds retail price.) If the Apple tablet appears for around 600-pounds (we’ll find out later – join me at UMPCPortal.com/live for chat), it better have something extremely special on board!

Obvious enhancements are stereo speakers, web cam and CD-input. An 800×480 resolution isn’t as high as it could be but is still going to work out well for the Android operating system (and means Appslib devs don’t have to make two versions of Android apps) and will make web sites and ebooks a bit more comfortable to read. Thumbing the on screen keyboard will be easier in portrait mode but more difficult in landscape mode.

Size-wise we’re looking at a very light and slim 203x107x12 mm which is going to be maybe 100gm more than the original Archos 5 Internet Tablet. Under 300gm! 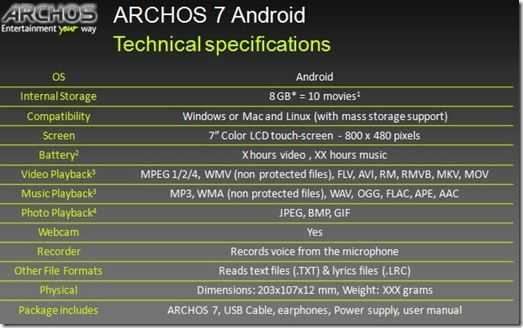 Yes, this could be a fake but it makes so much sense for Archos to push out a 7” version that even if it is a fake, I’d expect it to happen soon anyway. That just leaves a 3G version of the A5 (with slider keyboard please!) and then Archos will have one of the most interesting range of ‘smart’ devices yet.