I’ve been busy. I’ve just uploaded the 60th review for Notebookcheck and I now have to admit that exposure to high-end laptops and high-end smartphones has had an effect on how I approach ultra-mobile PCs.  My work processes have changed too so I now use a slightly different range of computers than I did one year ago. Mobility plays an important part, there’s a Chromebook in the list and I’m still using Windows Mobile, despite being so, so tempted to buy a Sony Xperia Z5.

Here’s my current kit-list. I’d love to hear about yours, and your usage scenario, in the comments below.

END_OF_DOCUMENT_TOKEN_TO_BE_REPLACED

As part of their regular improvements to drivers, Intel has released a new HD Graphics driver that applies to all Ivy Bridge and Haswell Ultrabooks. The new driver fixes a number of bugs and enhances game and program compatibility.

END_OF_DOCUMENT_TOKEN_TO_BE_REPLACED

Cyberpower Zeuss Hercules takes it up a notch above the Ultrabook 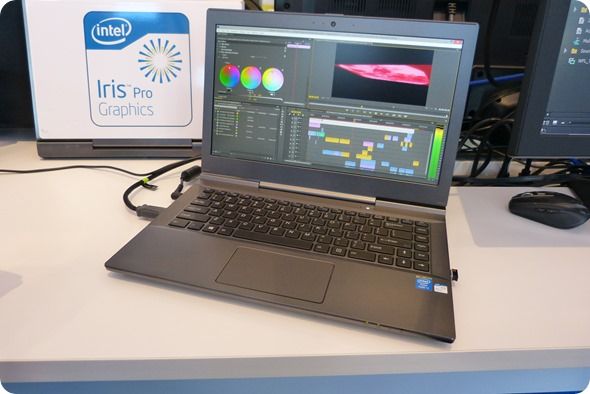 We’re expecting about 20% graphics performance improvement on the Intel Iris graphics (e.g. Zenbook Infinity) over the HD 5000 graphics seen in some Ultrabooks but what if that isn’t enough for you? The Cyberpower Zeuss Hercules offers Intel Iris Pro graphics (HD 5200) with a full-HD display in a 1.9KG package. It looks very Ultrabook-like but could have the grunt to take it into high quality gaming territory. Students, take note!