Apple Won’t Fix My iPhone, But Jailbreaking Will

Here’s one more reason I’d be using Android if I couldn’t jailbreak my iPhone:

The home button on my iPhone 4 has crapped out. Not entirely, but enough so that sometimes it doesn’t recognize when I press the button. For you non-iPhone users, the home button is the one you use every time you want to get back to the home screen (where all your apps are located), which means you use this button a lot.

Double pressing the button is also used to get to the task-switcher which lets you jump between apps, and holding it down activates voice control. The button has about a 50/50 chance of working, which means getting the double-press to work happens about 25% of the time.

Because the button is used so much, having it inconsistently work makes using the phone extremely frustrating!

So what to do? I call up Apple support. They generally have really good support with one major caveat, you better have a warranty!

Naturally, my phone is 20 days out of warranty (Murphy’s Law tells us that things won’t start breaking until your warranty period is over). The support person asks someone if they can give me an exception since I’m only 20 days out of warranty, but I’m turned away. The only option is to have them repair the phone out of warranty, which costs the same amount as buying a new iPhone, which I’m not interested in doing for a phone that’s still mostly functional.

So Apple won’t fix my phone. Fortunately, as a jailbreaker, I’ve got access to tools that regular iPhone users do not.

Jailbreaking is the de-facto term for describing the process of hacking your iPhone to release it from the restrictions that Apple imposes on it. Once jailbroken, you’ve got access to Cydia, which is essentially the jailbreak version of the App Store. Through Cydia, you can install apps and tools that Apple won’t allow in the app store because they do things that Apple doesn’t want official apps to be able to do.

Thanks to the awesome (and free) Activator app which is installed through Cydia, I can reprogram any of the phone’s buttons (or even software gestures) to do pretty much anything I’d like, including, simulating a press of the home button.

So as of now I’ve used Activator to reprogram my volume-up button so that a short hold simulates a press of the home button (a single tap still works as you’d expect).

Viola! Problem pretty much fixed (better than Apple could do for me out of warranty, anyway). While at it, I’ve also taken the liberty of making a short hold of the volume-down button compose a new text message in a pop-up (through another jailbreak app called iReal SMS), and I’ve set a short hold of the lock button to take me directly to the settings app for quick access to WiFi connection management and more.

The people responsible for jailbreaking, and developing the apps that are accessed through it, are providing extremely useful tools to those who want to take advantage of them.

This is why it’s upsetting that Apple tries to block jailbreaking at every update.

Jailbreaking has saved me money, provided support where Apple could not, and provides a bunch of functionality that I use daily that Apple’s iOS doesn’t support by default.

Not only this, but jailbreaking has been the birth place of many great improvements to iOS that Apple has stolen, or at least taken ideas from. It seems that Apple should be fostering the jailbreak community, not hindering it. Without Jailbreaking… the iPhone Would Suck 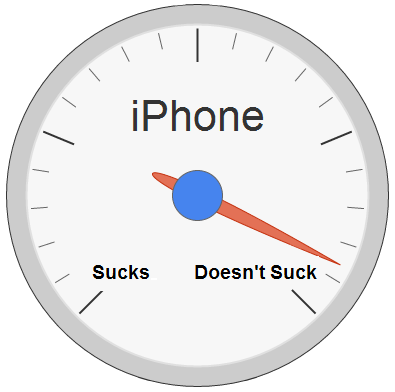 Ah… the iPhone. Some love it, some hate it, but I think most can agree that it has greatly changed the mobile landscape. The original iPhone 3G was the first phone that I ever bought that required a data plan on my cell phone contract. I’ve since upgraded to the iPhone 3GS for the extra speed and RAM, and in general, I’ve really enjoyed using the phone. The sad truth, however, is that the iPhone would suck if it weren’t for jailbreaking.

Jailbreaking, has become the de-facto term for describing the process of hacking your iPhone to release it from the often ridiculous restrictions that Apple imposes on it. Now don’t get me wrong. I’m definitely not a “hacker” and I certainly don’t have the skills to do the hacking myself. Luckily, there are incredibly intelligent people out there who do have said skills, and they make it easy for laymen such as myself to jailbreak their phone in a (relatively) user-friendly way. When people ask what the point of jailbreaking is, it’s almost a hard question to answer. Not because there aren’t benefits (there are many), but because there is not a single “killer” feature to point at. Instead, jailbreaking address all the nuances and details that Apple seems to have neglected. Jailbreaking is more about tweaks, rather than providing new mind-blowing features (though some of them are pretty significant) and the sum of these tweaks make the iPhone not suck.

Apple keeps the iPhone locked down to ensure a great user experience, and for the most part, they achieve this. However, this lockdown also means that they are forced to omit some really useful features, generally because they haven’t yet figured out how to implement them in a user friendly way. So, here I’m going to compile a list of the major things that are provided to me through jailbreaking — everything listed below is not otherwise available on the iPhone (with the semi-exception of tethering, more on that below.) 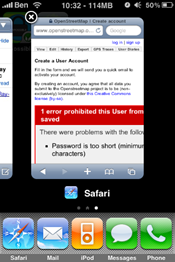 Despite that fact that this is an oft cited deal-breaker for would-be iPhone owners, I actually rarely have a need for it beyond what Apple has already implemented (mail and music run in the background.) However, when I do want it, I’m pissed off that it isn’t there. Luckily I can fix this by jailbreaking and installing one of several multitasking packages that enable the functionality. I personally use Pro Switcher which gives me a Palm WebOS-like card view of my running applications. I can click on one to pull it forward, or toss it off the screen to close it. If you’ve been following the news, you’ll know that Apple is finally figuring out how to implement multi-tasking, in a way that they see as user-friendly enough (according to Apple), with the upcoming iPhone OS 4.0 software. Sort of sad that Apple overlooked this feature until now and I’ve been able to multitask for quite some time, thanks to jailbreaking.