Mobilx have been working hard. Not only have they picked up the UMID and Viliv devices but they’ve just sealed the deal on the E-King S515 tilt/slider UMPC.

It’s the mini tilt/slider form factor that many of us wanted to see when the HTC Shift was around and it’s beaten the similar KAX-15 to the market.

With a similar weight to the UMID M1, one of the lightest UMPCs around, the Eking S515 is one that I really would like to check out further. I’ve had some fingers-on at IDF where it was labeled up as the Digicube Z8. [Hands-on Pics of the Digicube Z8 here] I wasn’t overly thrilled by the build quality and sizing but you’re looking at something that’s powerful and flexible. The 1.2Ghz Atom Z515 CPU will blast through javascript-heavy web-apps like you’ve never seen on your smartphone! 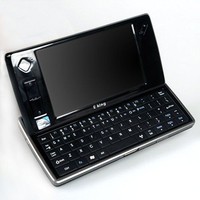 Mobilx are listing the base (non-3G) version with a 16GB SSD for 478 Euros and with an additional 3G module for 536 Euros. These prices are without operating system. From previous dealings with this device we think it has 512MB RAM which means that you’re limited to XP Home or a special Linux build. It’s such a shame that Moblin 2.1 for handhelds isn’t ready yet as a tailored build of that with support for the touchscreen would have been really interesting. I wonder if someone can slip us a copy of the version we saw running on the Aigo at IDF?

Specifications are a bit sketchy at the moment as we’re seeing sizings of 4.3 inch and 5.0 inch and resolutions of WVGA and SWVGA but those specifications will be ironed out in just a few days when Mobilx receive their first sample device. Lucky for us, that sample device will be heading to UMPCPortal where the obligatory live session will be held! Expected early next week.

Thanks to Mobilx for the information. (Now on their website) Motorola Droid brings another interesting Android device onto the radar 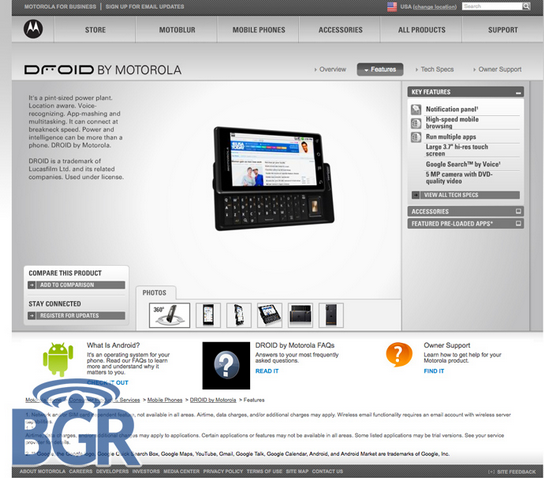 It is just me or does it seem like Android is the hot thing right now? Motorola and Verizon have been teasing the internet for the last few days about their upcoming Droid phone which is powered by Android (of course). Well the joke is on them as the Droid page seemed to have accidentally popped up ahead of schedule and the folks over at the Boy Genius snagged screenshots of the pages before they had a chance to take it down. Check the Droid’s specs:

There aren’t too many other details at this point, but with a faster CPU than most Android phones to date, and a 16:9 screen, the Droid is shaping up to be a nice MIDPhone. Engadget also has a video from the site showing the Droid in a 360 view, head over to check it out.