Welcome to my review of the WireLession W1060 7 inch MID. I’ve been looking forward to this review for some time now. As many of you can see, the mobile device market is exploding with new devices, and 2010 promises to be a year with at least double the number of new devices to be released. This of course is a double-edged sword, as many of us will be torn on which device to use. Some of you are aware of my quest to find the perfect multi-function device, so hopefully I can help people understand at least some of the devices being released.

W1060 Atop the Actual Retail Box

The WireLession W1060, also known to many as the Witstech (WITS) A81 (info-page), is a brand new MID (mobile internet device) using the Cortex A8 processor, the same processor as used in the iPhone and the Archos 5 Android Tablet. WireLession is a distributor of the A81, and has re-branded it with their own designation (W1060) and logos. Thedevice is currently priced at $220 on the WireLession website.

UPDATE: The unit does indeed have 256MB of RAM. It is a WinCE functionality that the other 128MB is set aside to be used by the Operating System.

The device box is a solid black color, not something you would find on a store shelf and not much larger than the device itself.  Everything that was supposed to be included with the device was there (cables, battery, adapter, and the device).

The device casing felt very sturdy, but it appears to be of a high quality plastic and not metal as I had been previously informed. As the pictures show, the device is jet black and shiny. When I held the device it felt extremely solid and good to hold, noticeably lighter than the SmartQ7 I reviewed previously. There was no flexing and, as a whole, it was smaller than I thought it would be from the pictures. The build quality is impressive, and reminds me quite a bit of holding a bigger Archos 5 Android Tablet.

The W1060 and the Carry Case I purchased from Fry’s Electronics for $12.99 – it fits perfectly

After putting in the battery and charging the device for a while, I turned it on and was immediately impressed with the quality of the screen. It is clear and vibrant, and very responsive to touch. To the naked eye it seems brighter and clearer than my SmartQ7’s screen. See the pictures of the included in this post for a comparison. The interesting thing is that the screen on the JE-100 eBook Reader (see my review) seems a little better than this, but it is very close. There is one big problem with the screen though â€“ there is no way to rotate it, except within certain applications. WitsTech has said they are working hard on screen rotation and I was told it would be about 12-15 days before we see an update for it. Unless they can’t get some type of screen rotation, that could be a deal-breaker for many users, especially ebook-reading users. [Edit: Note that an Android build is being worked on but without an accelerometer in the device, rotation would have to be via a manual button/setting]

I tested the device for a couple weeks, during which time I watched video, read ebooks and comics, and browsed the internet. The battery life is as advertised, which is to say 5 to 8 hours depending on the task. Listening to music and reading can take you to the battery-life max of 7-8 hours. Video or web browsing and you won’t get more than 3-4 hours indicating the load that a wireless connection can put on a device.

To charge the device, simply use the included adapter or plug it in to your computer via USB cable. It will charge faster via the adapter, but the USB can also be very convenient. When charging, the power button lights up, turning green and red. When fully charged, the power button light turns completely green. It actually looks pretty cool. You can also see it is charging by looking in the tray on the bottom right of the screen in WinCE. Awareness of mobile computing devices has risen dramatically in the last year and many people are now considering which device would be suitable for their given tasks. For users that plan on using their device to read books or comics, it seems that the 5″ to 7″ inch MIDs are becoming quite popular.  In the summer, the SmartQ7 hit the eBook reading crowd with quite a splash.  The device gave readers some power to surf the internet, play games, listen to music, and most importantly, read books and comics on a screen size that was comfortable but could still be carried around quite easily.  All of that, and the ability to run Linux, WinCE, or Android on a multi-boot partitiion.  The unit was less expensive than many ultra mobile PC and MID devices in the same form factor, at about $230 shipped.

Hot on the heels of the SmartQ7 we have the W1060 by WireLession.  Some of you may remember the posts a few weeks ago about the A81 MID, a 7″ MID with the ARM Cortex 8 processor.  Since then, the unit’s popularity has been growing, and as you can see, it is listed on UMPCPortal and CarryPad as one of the most anticipated devices.  The WireLession W1060 is the branded name of the A81 MID.   With the ARM Cortex A8 (the same processor in the iPhone), users have access to a device that can surf the internet quickly, listen to music, watch video, and read books on a very comfortable 7″ screen.  The device should certainly outperform the SmartQ7 (and possibly even the new SmartV7), and if what the supplier says is true, the build quality is quite a bit better as well.   Information so far is that it has a metal chassis and is quite solid.  It can play flash movies and supports AVI, MPEG4, MPEG2, WMV, H.264 and other video formats.  Due to the fast processor, it should also be extremely fast when loading comics and turning pages.

I have a unit on the way right now.  After some serious hardware and software testing, I’ll post a detailed review of the device.  For now, check out this video and browse the details of the W1060 on WireLession. 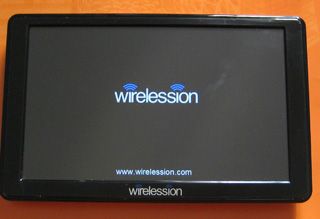