Every few weeks we seem to get a flurry of blogs about keyboards. Despite UMPCs being touch-capable devices with handwriting recognition, dialkeys, on screen keyboard and speech input, you still need a keyboard. We all need a keyboard.

Ideally you’ll get a ultra mobile PC which has a packaged keyboard (ASUS R2H for example) but if not (and if you haven’t fallen for the very practical convertible notebook design) you need to decide on a solution. Here’s some info from previous posts and a few new ones that have been floating about over the last week.

Brando workshop make a small keyboard and Thoughtfix went out and bought one…for $25! A bargain.

It’s the perfect size to fit in a ultra mobile PC gadget bag. 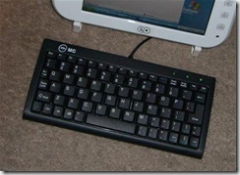 Jezlyn at “Late to the Party” found another option. 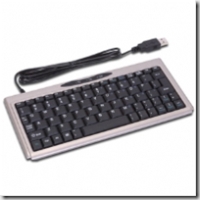 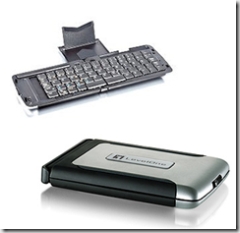 You might note that the English web page for the device shows compatibility for Palm/ WinCE/ Symbian. Under the compatibility list though, it shows that its also compatible with XP. Its perfect for the Raon Digital Vega that I have. The German web page gives more stats (they love those stats!) which include 90 hour operating time, 160hr standby, uses 2x AAA batteries and has an on/off button. I did an unboxing and first-impressions post but since then I’ve been talking to Level One about the problems I’m having with it. It has a high failure rate (keypresses not registering.) Level One think its a hardware fault so I’ll send it back soon for a replacement.

The other option was the new Bluetooth version of the iGo Stowaway keyboard. I read about it on jkOnTheRun 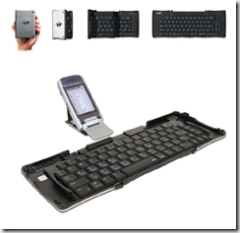 Its a smaller design when folded and it only uses one AAA battery for the same claimed usage life but at something like Euro100 I think I’d rather spend the extra 40 on something else.

There’s another review if it at ExperienceMobility.

$56 is a good price but it looks like its got silicon keys. I don’t fancy that myself.

Finally on the wireless keyboard front, there’s a Nokia BT Keyboard.Its the SU-8W and it looks like its $149 in the U.S. 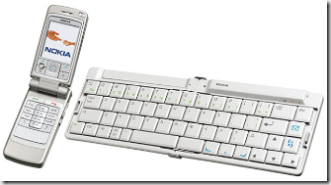 Girlsgonemad have reviewed the G-Tech fabric keyboard which uses the Eleksen technology that I posted about yesterday. They seemed to get on ok with it.

Here’s the Eleksen pouch/keyboard solution this is not in production yet. 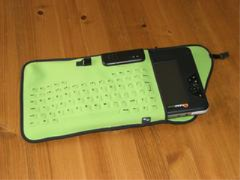 Anyone got any more to add to the list?

Technorati tags: mini keyboard, umpc
View details of all Ultra Mobile devices in the ultra mobile PC product database.
From N800 to Flybook V5, its all there!