15 Manufacturers will use Snapdragon to make ‘Ultra Mobile PC’s’ in 2008. 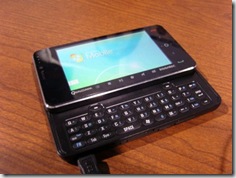 Another Snapdragon-related report from Stacey at GigaOM who quotes Qualcomm as saying they have 15 device manufacturers lined up for Snapdragon-based devices that should be available in 2008.

That’s a lot. But not if Qualcomms or Stacey’s definition of a ultra mobile PC is different from mine. If we re-name the devices, mobile Internet smartphones and consider the prototypes shown at CES then I can believe it because in the smartphone world, every manufacturer has to play the Internet game in the top quartile of their product ranges. Anything less than a Cortex-based device is risking being under-powered for the heavyweight world of ‘real’ Internet.

I’m excited that the ARM-based devices are moving into the mobile Internet market. It means competition and learning. Take the best of everything in 2008/9 and 2010 is going to bring some absolute gems based on Cortex 9, Mobile-ITX and Moorestown.

View details of all Ultra Mobile devices in the ultra mobile PC product database.
From N800 to Flybook V5, its all there!