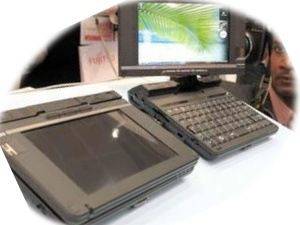 Focusing on the ‘high-end’ of the market, the Fujitsu U2010 that was announced in Korean today will be an Atom-based (we assume Silverthorne/Poulsbo) ultra mobile PC running Windows Vista and including GPS and 3G. One of the problems of the previous U1010, the multi-function keys, might have been solved in this model as there’s a 6th row of keys on the device. Weight is an impressive 610g. Screen is 5.6" at, we assume, 1024×600. I also see a fingerprint reader and SD card reader.  There’s no word on processor speed but we can assume that this will be running 1.6 or even 1.8Ghz and a few quick calculations based on a small 20wh 2-cell battery as seen on the U1010 returns a potential in-use battery life of around 3hr which would extend to 6hrs with the commonly used 4-cell battery pack.  A local Taiwanese price of $1300 puts it into the middle of the ultra mobile PC pricing along with other 3G-enabled devices like the Q1 Ultra HSDPA and a July launch ties-in with the expected availability of the Intel Menlow platform.

Its good too see some more pro-mobile devices appearing but the success of this little baby will largely depend on how Vista performs so keep any eye out for reports from Computex.