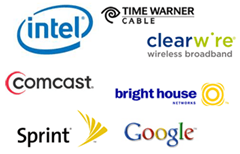 Not living in the U.S. puts me at a slight disadvantage in understanding the mobile Internet market out there but my head is going through a number of scenarios today after reading about the possible, but likely, $3.2Bn investment plan to prop-up the WiMax effort in the U.S.

Intel, a silicon manufacturer, a WiMax chipset manufacturer and mobile Internet platform specialist is giving $1bn. Google, an Internet search, advertising and services company, is giving $500m. Comcast, a cable company, is giving over 1 billion dollars. Time Warner, cable company and owner of AOL (AIM, Weblogs inc., ICQ, Winamp, Mapquest etc) is throwing in $500m and Bright House, a triple-play company is putting in $100m. Where? Into a joint venture that brings Sprint and Clearwire together into a new voice and data company valued at around $12bn. [More after the break…]

The existing Sprint WiMax service known as Xohm, has already been delayed but is potentially still ahead of LTE technology, based on existing UMTS standards, which could be another 2 years before it’s available in the U.S. It looks like Xohm, as a brand, could die as the agreement appears to be that the new service will be white-label so that the cable companies can sell under their own brand.

Most commentators that appear on the Techmeme thread today seem fairly negative about it. The Wall Street Journal say "Diverging corporate interests pose another set of challenges. Few big technology collaborations deliver on their founders’ goals." For me, just understanding the desires of the companies involved is a headache. CNet are also worried: "it remains to be seen if this network will ever have the legs it needs to compete against networks built by competitors using a technology with a greater following." LTE has been picked up global support from mobile companies over the last 6 months and that includes AT&T, Verizon and presumable T-Mobile and although it’s behind as a technology, existing 3.5G services are already providing users with download speeds faster than most would ever require.  Om Malik also puts forward a note of caution saying that it’s a ‘spaghetti-like mess of conflicts."

I like what the New York Times says though; "The partnership of such fundamentally different companies underscores the convergence of Internet, entertainment and telecommunications services. The wireless network of the future is expected to be fast enough — rivaling speeds that cable customers have in their homes today — to allow delivery not just of text and simple Web pages, but of video and advertising" I agree. This is a new area of intermixed relations between service providers, silicon providers, software providers, content providers, search providers and advertising providers. It a bit much to expect anyone to be able to really understand what’s going on here.

Sitting in the middle of my 7.2mbps HSDPA cell here in Europe I’m finding it very difficult to get excited about WiMax but one thing is for sure, a lot of people are prepared to put a lot of money into ‘mobile Internet’ and that’s a good, good thing.