The 912 surfaced a few days ago on the Gigabyte website without an image but the official image is up now. [Gigabyte product page] 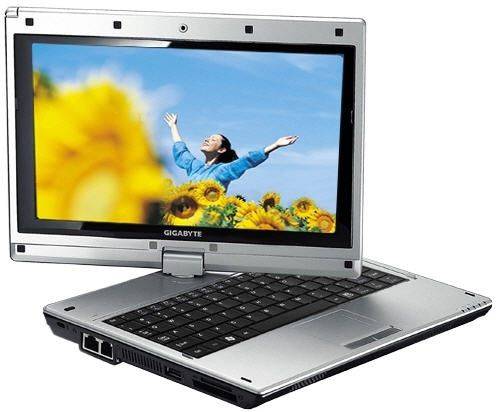 With an 8.9" screen at 1280×768 in a case that’s not a few mm bigger than the Eee PC 900, it looks like it could be a real VyeS37 killer. Assuming the device is based on Diamondville, it will have similar performance and with its 32wh battery its likely to have a much better battery life than the Vye which was never the efficient device that it could have been.  3-4 hours is a possibility on the standard battery with this.

According to Crave, Taiwan [Translation] some pricing info has been given out too. RR Pricing is said to be a very competitive 20,000 Taiwanese Dollars which is about 660 US. Dollars. They also reveal that the device has a web-cam, 2.5" SATA drive and an ExpressCard slot. No details on whether it’s a hard or soft touchscreen yet.

I’ve updated the M912 details in the database.