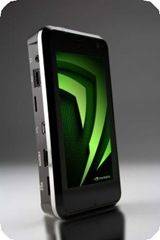 In an article over at CNet, Mike Rayfield, general manager of NVidia’s mobile business reveals that the company will show its new Tegra platform and a MID reference design (left) this week.

Tegra comes in 600 and 600Mhz flavours and will be formerly revealed tomorrow if earlier news is correct. It will be interesting to see if this is a Cortex A8 based device with enough processing power to give the Atom Z-Series a run for it’s money.

The reference design looks like an oversize Nokia N96 to me which certainly isn’t a bad thing as it’s likely to have a bigger 4.8″ screen at Internet-friendly resolutions. You could also fit a nice big battery in there for all-day life.

One really interesting aspect of the ‘leak’ details is that the design is being built exclusively to work with Windows Mobile. Windows Mobile 7 is mentioned too. The article also hints that the MID-range extends from 4-inch minitablets (with keyboards hopefully) up to subnotebooks for NVidia. Stick that in your diagram Steve!

Update: Gizmodo have an image that seems to suggest that Tegra uses an ARM11 core but its not 100% clear where the image comes from.

I’ll be keeping an eye on new Nvidia Computex website over the next 24 hours. Also note that there’s a MID section on the ARM website that shows the N95 and iPhone as new products.

Update. ARM issued a press release. Tegra will use the ARM11 MPCore (up to four cores) technology.