Thousands and thousands of people been testing the Medion Akoya Mini out for the first time in Germany, Austria and Holland over the last few days and I’m sure there have been quite a few photo galleries, unboxing videos and first impressions. I’m one of those many and as most of the owner-reports will have been in German or Dutch, Iit makes sense that I put my own thoughts out in so that people get a feel for how the UK version might be (there’s no confirmation on this BTW) and how the sister device, the MSI Wind might perform.

I’m going to take it from two angles. First, a general look to see how the device sizes up for the average buyer and secondly, a look at the mobility features which are important to many people reading UMPCPortal. Before I start, a word about the average buyer. It looks like the average buyer will range from young to old, from home to office and from work to play but in most cases I think buyers are computer-literate and realise that this netbook isn’t ideal as a primary computer. I spoke to a Mother of five in the queue at Aldi when I bought it and she was buying one for her son who needs it for studying. I saw a 50+ guy with one under his arm and since I’ve had mine, all the family have expressed interest for different reasons. My brother thinks it might be good as a second, travel-light work PC. My wife also thinks it will be good for her health company presentations and my mother’s eyes lit up when I told her it would connect to a normal monitor and keyboard and that it was more powerful than the big, noisy, hand-me-down she was using to check her emails in the spare room at home! I suspect this profile matches over 90% of buyers and for these users, the Medion Akoya Mini is near-perfect. As for the mobility users and the others (with big fingers or high expectations,) there are major issues. This isn’t an Ultra Mobile PC. Let me take you through my first impressions and you’ll see why.

Out of the box, the device really impresses. It’s well-finished, has a lovely smooth feel to its plastics, is stylish, has good coloring (i’ve got a black and champagne one) and is small in the hand. At about half the size and weight of a normal notebook it’s small enough to make people wonder why they lug 2.5kg of device around. It’s definately a mobile device. 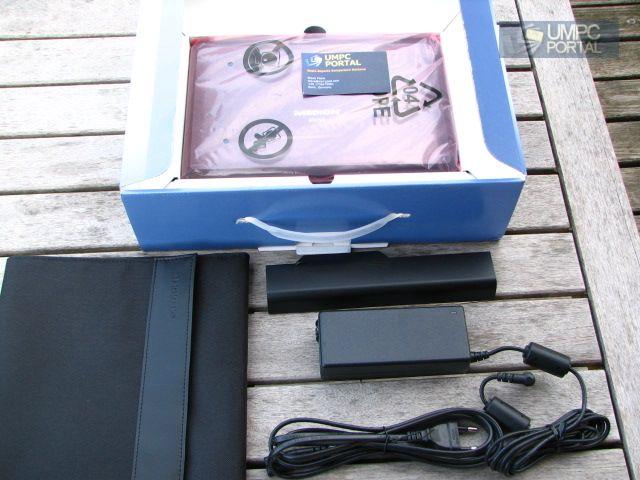 The screen mechanism is smooth and has a nice magnetic catch that holds it shut. The keyboard spreads right up to the sides of the device. You get the feeling that it’s been built around the keyboard rather than built around the screen as you find with notebook PCs. The overall build quality seems very high with no bending keyboards or plastics, no rattles and no badly fitting plastic joints. I dont think anyone will be expecting higher build quality than this.

I’m sure that every owner will have a little tap-tap on the keyboard before they turn it on and they probably won’t be dissapointed. It feels nice. The keycaps feel strong and solid and there’s no key rattle. All the keys are where you expect them and the return key is a good, veasy to hit, size. The slightly smaller size is not likely to scare many people away and for most, it won’t take more than a few hours to get familiar with it. On the outside of the device the owner will find all the important ports and while there’s no PCMCIA or expresscard slots, the three USB ports are far more suited to the average owner.

The XP Home build seems to be well prepared with a nice selection of software including anti-virus (BullGuard) the Corel WordPerfect Suite, Photo Impact and a number of other usefull applications including PowerDVD and pre-installed photo print software that uses the Aldi printing service. Despite these pre-installed packages there doesnt appear to be any lagginess in boot-up, application startup or any overly large memory footprint. There’s a good amount of documentation in the box which includes a quick-start guide, full manual and guides for some of the included software. Restore CD’s are included.

As for performance, most owners aren’t going to hit any major limitations if all they do is internet and basic office work. The processor is only about 1/3rd as powerful as a 1.6Ghz Core 2 Duo though and will prevent users from doing video work or more importantly, getting satisfactory perfromance over time. Multiple software installs, service packs and background tasks will mean that a user will have to be careful with housekeeping to get the best out of the device in daily use. Video playback seems powerful enough for most formats (detailed testing to be done) and there’s ample space on the 80GB hard drive which, under a CrystalMark test, appears to be a good fast unit. Certainly faster than most 2006/2007 UMPCs.

The 3D graphics unit included will be good enough for Google Earth and some low-end gaming but certainly not good enough to get the best out of recent games. Boot-up time is a respectable 40 seconds, standby is also good at under 4 seconds resume time. Return from hibernation is about 25 seconds.

Owners won’t have any complaints about heat or fan noise as, based on noise and airflow, there seems to be a big, high quality fan installed. The unit will is much quieter than most standard notebooks.

Battery life isn’t as exciting as it could be. Intel’s Atom does scale down to some impressively efficient packages but the Diamondville version isn’t one of them. In the Akoya, the unit will average about 10w drain which, while good compared to standard laptops, drains the small 24wh battery in under 2.5hours in normal use. Use of a higher-quality battery would have pushed this over the 3-hour mark but as that’s not an option, users who require long battery life will have to buy the 99 Euro extended battery for 5 hours life.

The speakers are adequate. 6/10 based on what is possible today. Microphone is a non-array type which means that a headphone might be neccesary for skype usage.

The mouse pointer is a nicely balanced synaptics device with tap-to-click and configurable scrolling areas but the mouse buttons I’m finding to be a bit harder to get used to. The single, dual-action bar seems to be positioned akwardly and requires a good hard press. Using tap-to-click is a far better option.

When all is said and told, I don’t think I could highlight any serious problems for the average user. Style and features are well thought out and the price, while not as low as some netbook options, is still in the ‘great value’ category. After just a three or four house testing the device, it’s clear to see that.
Mobility factors.
Its clear from the word go that the Akoya Mini isn’t an ultra mobile computing solution. Its mobile, of course, but the 1.2kg weight makes it 50% heavier than some other options. The 10″ 1024×600 screen is also bigger than necessary for ultra mobile use. An 8.9″ or even 7″ screen device at that resolution allows for a much smaller casing. The Eee PC 900 and 901 and Kohjinsha SC3 lead in this area.
The choice of a large HDD over a smaller SSD (for quicker access times and better ruggedness) also points away from serious Ultra Mobile use, that battery life is too short and finally, the lack of Bluetooth really hinders its use with a teathered mobile phone. Small bluetooth USB keys are available but it needs to be built in to reduce the risk of it not being available when needed at crtitical times.I don’t see people choosing the Akoya Mini over something like the Eee PC 900 or Kohjinsha SC3 for a lightwight or mobile-featured solution.

The Medion Akoya really highlights the difference between a cheap, small notebook and an Ultra Mobile PC. While perfect for the average user it lacks the special features that separate netbooks from true Ultra Mobile PCs.

Based on what i’ve seen so far over the last few days, here are some guideline scores:

Review written on the Akoya Mini – The keyboard has been easy to use for me.