Benq Aries 2 MID to launch ‘this quarter’ in Europe.

Benq recently won a design award for their Aries 2 MID (that we’ve seen before) which prompted a few news releases, one of which included the line "BenQ also claimed that the new MID model would be launched in Europe this quarter." 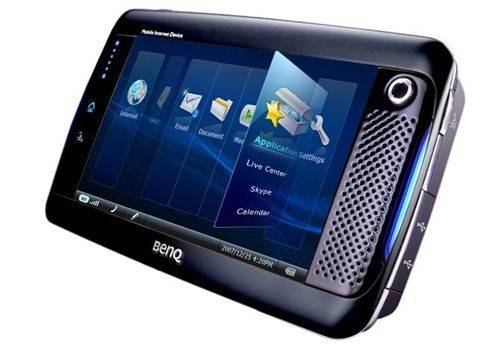 A businessweek article included the image above. It’s certainly looking attractive! Other snippets of info include a mention of the ‘shake’ interface where windows respond to a shaking action and a mention of an auto-rotate feature. Benq calls this the ‘Free Surf’ user interface. Obviously they’re making a big deal of it so it needs to be good!

Aries2 won the Bronze Award in the Interactive Product Experiences category at the 2008 Industrial Design Excellence Award (IDEA) held in the United States.

I’m hoping we’ll see this at IDF and IFA later this month. No lets aim higher than that.  I’m hoping to see this on a UMPCPortal live session ASAP ;-)

For the latest specs and news, check out our Benq MID info page.