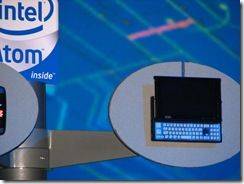 Just spotted on stage at IDF.

Update: It looks like exactly the same hardware as the original. Its been confirmed too. OQO will use Atom.