I took a few hours out yesterday to meet up with Johannes who runs Netbux.de (get it?) and Einfach-eee.de. He had a Fujitsu Amilo Mini that he offered to show me so we met in the coffee shop, swapped devices and chatted for an hour. 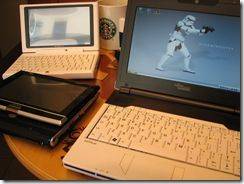 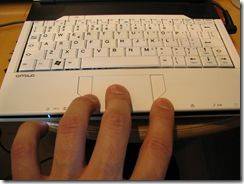 I have to say that after using the Everun Note for a few days, the Amilo Mini felt huge and actually rather boring. Its not bad in any sense as the design is slightly different (not my cup of tea though) the ExpressCard/34 slot is useful and they appear to have put good quality batteries in the device that will return a real 3hrs with WiFi on. I didn’t like the mousepad to start with but I did start to get used to it after a short while. The keyboard is the same as on EeePCs so there’s nothing to mention there. Screen brightness was as good as other netbooks. The whole device seemed almost rugged in its build quality. Of course, performance is just as good as you would find with all the other Atom-based netbooks. Very swift with Windows XP. There’s Bluetooth included which is useful but the disk was  a 4200RPM, single platter 1.8″ Toshiba MK6028GAL. Not the fastest of options but as there seems to be a disk access plate, upgrading to a fast SSD should be possible. 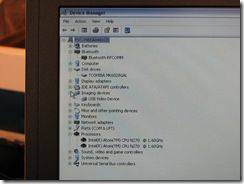 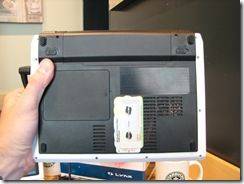 For 399 Euro, there’s not much you can say against it. If you like the look, trust the brand and fancy playing with exchangeable faceplates, its a very safe purchase. The only other options you might consider are the MSI Wind and EeePC 1000H which offer better keyboards, easier-to-read screens and are priced at the same level.

Amilo Mini Specifications are in the database here. More images in the gallery.

And what did Johannes think of the Everun Note and Kohjinsha SC3? Well he was surprised at the size but immediately got that fact that they are in a different class and not meant to be laptops. As is normal, I had to give a quick usage demo to highlight that the screen is the mousepad and that it can be held in one hand. I saw some raised eyebrows but i’m not sure if he really fell for the Ultra Mobile concept!

Thanks to Johannes of Netbux.de