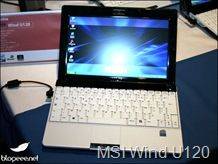 Finally a breath of fresh air in an area of computing where the only major difference in products was appearance and price!

I’m really glad to see some interesting new stuff from MSI. We recently talked about the MSI Wind U120 [Portal page] which is just like the original U100 but with 3G and some increased storage options, but that isn’t very exciting is it?

Now news is spreading that MSI will be releasing two additional netbooks some time around January. The netbooks will be the U110 and U115; I’ve put the interesting things in bold:

Like I said, all of this is new and exciting to see in a netbook. However, after reading this I can’t help but wonder how they plan on keeping the prices down. Nearly everything in this list will run the price up over current netbooks: new CPU+chipset, two storage drives, and draft-N Wi-Fi. We’ll have to wait and see but I would image the top end U115 will run you somewhere around $700 if not higher.