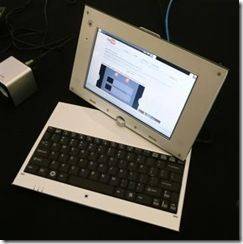 Qualcomm demonstrated a Snapdragon based netbook in London last week and gave us a few hints as to how netbook-style devices based on it might turn out. Silicon.com, who published images and information from the event, asks if it’s the next-gen netbook.

We probably won’t see many of these in the western world as we like our processing power (way) too much but I do expect these to be a success in 2009 and 2010 in other markets. Markets that haven’t really had the chance to use laptops and who’s main form of communication is a GSM phone could benefit from this.

We could see one or two ultra-light, ultra-thin devices here but for them to be a success, they are going to have to offer levels of portability, user interfaces and battery life that only a few companies are in the position to be able to achieve.

As for battery life, in normal Internet-connected scenarios, there won’t be much advantage as screens and radios take the lions-share of the battery. There’s a lot of talk about multi-day battery life but the people that talk about this fail to mention that it’s standby life. Once you start switching those transistors on and off to decode today’s intensive web pages, power drain rises into the same ballpark as ultra low power X86-based devices. Even Qualcomm themselves are being honest about this.

Snapdragon will enable mini laptop style devices – with screens of between nine and 12 inches – to run for between four to six hours without needing to be charged, according to a spokesman.

The last time I spoke to Texas Instruments, they were talking about similar figures too. The 3-4W total power drain range is about the limit of technology for 8-12″ screens in the short term.

Personally, I think the more interesting market, is the mobile Internet device market where 5″ screens enable the best balance between size, portability and quality for video, navigation and our old friend, the world wide web. It’s here, where screen power drain is much smaller, that the new ARM-based platforms could make a bigger impact. Those ARM-based devices were supposed to be in the market already but appear to have been delayed. According to word-of-mouth reports that i’m hearing though, devices are on their way. Indeed, I wouldn’t be surprised to see Apple putting out a larger, more powerful iPod web and video-focused device on these architectures in 2009. ComputerWorld thinks so too. Unless Apple have something up their sleeve with PA-Semi