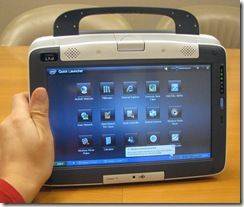 The new 8.9" touchscreen Classmate PC that LaptopMag got some time with isn’t going to be most people’s cup of tea, but that’s probably because it’s not aimed at most people reading tech websites! There’s a few elements that are worth highlighting though.

Also known as the CTL 2go, this product is based on the netbook platform and uses a ruggedised housing designed especially for the education sector. Launch is expected at CES 2009.