How long does your smartphone last in ‘MID’ mode?

I think it’s fair to say that if you use a smartphone like a MID, it isn’t going to last long. My N82 lasts for about three hours; less if I’m using 3G. The iPhone, about 4 hours under heavy use and the Android-based G1 seems to be even worse. The fact is that radios and processing take energy and although your smartphone will sit doing nothing for days on end, once you start using it connected over Wifi or 3G, the clock starts ticking.

There are ways around the problem and, to a certain extent, you can change your usage pattern to help the situation. Picking up emails, sending a few messages and then disconnecting is common practice but it’s not exactly Web2.0 is it! If you want to stay connected and keep services open for real-time internet applications you’re down in the battery-life danger zone. There are a few exceptions of course in the smartphone world but on the whole, it’s only because the battery is big. The Nokia E90 has a  5wh battery. The Athena has an 8wh battery.

I’m not saying that smartphones are poor, I’m just saying that we’re moving to the point where both smartphones and MIDs are requiring big batteries for hardcore web use and that means that fitting them in your pocket becomes a problem.

Do you use your smartphone in an always-connected and active mode? If so, what is your experience. Have you had to reduce your internet usage to preserve battery for voice usage? Do you carry spare batteries. How about a spare phone? Or do you just wait until you are able to pull out your laptop? Let us know about your smartphone battery life experiences  in the comments below. Oh, one last thing. Check out this monster battery pack for the G1…It’s as big as the battery in an Aigo MID and makes the G1 almost as big as an Aigo MID! 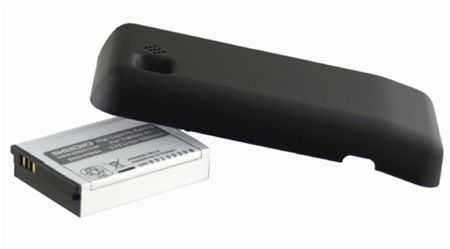