MIDs and Moblin. Where do we go now? 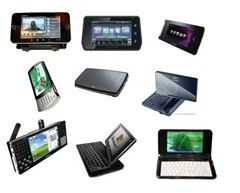 Yesterday’s news that Moblin V2 for MIDs is now delayed until 2010 has me thinking long and hard about what’s going to happen now. Have Intel put their MID plans to one side? Are they confident that Moblin V1 is enough for the current crop of devices? What will the OEMs think? Are they happy to refocus onto netbooks or are they simply waiting for Moorestown? Should I put UMPCPortal on ice and take a year’s holiday?

Moblin V2 is moving forward as planned and as far as I know, it will be ready for OEMs and distributors in Spring. It’s got an extremely high chance of success because most Linux distributors for netbooks have already signed up to use it. Ubuntu, Asianux, Xandros, Linpus. Novell, gOS, Mandriva, Pixart, S2C, Turoblinux have all publicly stated that they will use Moblin and even if only 10% of netbooks are going out of the door with Linux (I suspect it’s between 20 and 30% myself) then there’s a multi-million unit opportunity there. If the predictions are correct and 35 million netbooks ship next year then 3.5 million Linux desktops in one year will be one of the most successful Linux-based roll-outs yet. Given that Intel have hundreds of engineers working on it and have direct access to the people that designed the core hardware, they should be able to squeeze more from it than the average Linux distributor. There’s also a possibility to get that much needed app-store in there too. If Intel can create and manage that then there’s a revenue channel that makes everyone sit up and take notice.

While disappointing that MIDs are getting pushed to one side, it obviously makes sense that Intel focus on the netbooks. If Moblin becomes successful, it could increase it’s percentages and as XP fades away during 2010, it has a high chance of becoming the de-facto choice. If it gets good feedback, there’s every chance that percentages could rise even higher but in the meantime, what’s going to happen to MIDs?

Currently there are three distributors of Moblin for MIDs. Canonical (Ubuntu), Asianux (Midinux) and Wind River. Canonical are still working on Ubuntu MID with Moblin V1 and as we’re seeing updates filter through for the Compal-based MIDs, one assumes that Asianux are still working on it. As for WindRiver, it’s not clear at the moment what they are working on but at least there’s two major distributors working on MID products and there’s no reason to think that what they will produce will be second-rate just because they’re not using Moblin v2. In fact, even if V2 was on target for MIDs, it would still be late 2009 before anything would be available and then you’re getting into the Moorestown timeframe.

Aha, Moorestown. Now there’s a thought. What if Intel are happy to re-position Menlow as a netbook platform and to put effort into promoting it that way. That would make sense apart from the glaringly obvious problem that their own Menlow distribution doesn’t currently support the Menlow platform. If that’s fixed in a short timeframe though then it might make sense to re-position. By offering Menlow it gives OEMs the chance to choose from low-end netbooks with big battery life (that can compete with the incoming ARM-based low-end Linux-based netbooks) or to go with slim and light netbooks with high-end video support. Given that Windows 7 runs well on this platform too, the 1.8Ghz (actually, lets assume they push out a dual-core 2.0Ghz version) could hit the mark quite well for the consumer. By repositioning Menlow, Intel are then able to separate Moorestown as a MID platform and avoid any confusion. Moorestown is pocket-focused and coming in 2010. If OEM’s aren’t reacting to the Menlow platform for MIDs then to squeeze everything they can from the netbook market makes total sense.

There are a few other options though. The first is Android. From day 1, Android has been positioned as a CPU agnostic platform and recently we’ve started to see X86 ports and even a team claiming that Android has a ‘MID’ setting.

…we discovered that Android already has two product “policies” in its code. Product policies are operating system directions aimed at specific uses. The two policies are for 1) phones and 2) mobile internet devices, or MID for short. MID is Intel’s name for ‘mobile internet devices,’ which include devices like the Asus netbook…[Source: Venturebeat]

With Intel already in the OHA, it wouldn’t do them any harm if someone came out with an uber-pda, web tablet, PND or even productivity device based on Android and Intel. There are big rivers to cross with Android (display drivers is the main one) but it’s not technically impossible and from a marketing perspective could make for a very interesting discussion when you consider the brand power there.

The other option is XP. Drivers are now available for the Menlow platform and it’s running acceptably in most cases. Some graphics issues remain but there are already products shipping that lay XP over Menlow. Viliv have even gone one step further with their products and have implemented a user interface overlay which helps navigation between applications. It also smartens-up what is becoming a boring UI on XP. Given that Microsoft appears to be open to special licensing for XP and that early adopters are prepared to pay more for these devices, this would be an easy route to take. Strangely enough, it would turn MIDs into UMPCs in most cases and we’d be in a position where the Origami dream of 2006 would be realised with low-cost, long battery life devices.

The final option is just to let MIDs take their path and to let the OEMs decide. It’s an option, but not one I’d be interested in taking if I was Intel. They have a platform that is perfect for many mid-tier gadgets and there’s competition out there from ARM. Personal navigation, personal HD media players, web tablets, ebook readers, carPCs and other niche but stable markets make up millions of sales per year so there’s a big opportunity there. The middle-ground of 4-5" gadgets isn’t going away because in some cases there is simply no substitute for screen size. It’s a good opportunity to get products in to markets that are currently dominated by ARM so it makes sense to use it as a stepping-stone.

We have three chances to get indicators about Intel’s MID plans in the next three months so the direction will become clearer. Firstly there’s MWC which starts on Feb 16th. According to BusinessWeek, "Intel plans to announce new partners in February at a mobile technology conference in Barcelona, Spain" so we can expect some information there. Considering that MWC is largely about phones, it will be interesting to see why they’ve chosen MWC for the announcement. Secondly, there’s CeBIT in March. We’re planning to meet up with Intel and find out exactly what’s going on. We’ll also have a chance to talk to OEMs to find out what they think and what they’re hearing through their connections. Lastly, and most importantly, there’s the Intel Developers Forum which will take place in Beijing in the beginning of April. Although the event has been reduced down to 1-day, we should get information about the status of Moorestown.

I don’t think anyone can deny that netbooks are the focus of the day. It’s obviously sad to see new technologies stalled as a result but shareholders come first and when your profits drop 90%, you have to take drastic measures. Intel may lose some advantage by re-focusing but it doesn’t mean the mobile Internet market will go away. We’re already seeing products from many categories moving into the mobile Internet space and many of them aren’t Intel-powered. Archos have a ‘MID’ in their 5. Many would say that the iPhone is already the best MID on the planet. Mozilla is getting ready to launch Fennec, the high-end mobile browser on Windows Mobile. Palm has announced their WebOS along with a very powerful smartphone and Ti, Nvidia and Qualcomm are all preparing platforms that can be used for full, fast Internet-connected devices. The definition of MID might change or, as has largely happened with the acronym ‘UMPC’ it might go away all together but I don’t think that anyone could honestly say that netbooks are going to stall the progress of getting ultra mobile Internet-connected devices in as many hands as possible. Whatever they’re called, we’ll still be here to report on them and something tells me that we won’t need to wait long either. UMPCPortal on ice? Never!