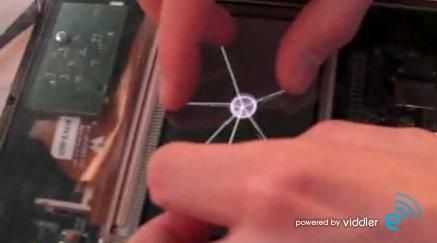 Jkkmobile points out an interesting video from Engadget that shows some interesting multi-touch demos on a resistive touchscreen. Have a look at the video embedded below, but be sure to stick around for some thoughts below.

The demos are definitely neat, but I’m a very big proponent of capacitive touch technology, not because of multi-touch, but because of its consistent recognition of input. Multi-touch and the ability to do gestures is great, but I would argue that it is not the best part of capacitive touch technology. So they have managed to port the multi-touch facet of capacitive touchscreens over to resistive touchscreens, but they stick lack the consistent detection of input. Nothing is more annoying to me than having to click on one item several times because it is easy for a resistive touchscreen to either miss or misinterpret your input. It really ruins the touchscreen experience. Low pressure input resistive screens help to alleviate this to some degree but the issue still remains. Capacitive touch’s ability to extremely consistently recognize touch input is what makes it possible to have a viable on-screen keyboard on a device the size of the iPhone. I’ve tried many other resistive touch phones with OSKs, and the experience is almost embarrassing to the hardware.

As for the pressure sensitivity of the demoed screen: The way it was described is that it recognizes how much pressure you are putting on the screen by how much contact there is with the surface of your finger. If this is the correct explanation of how the technology works, then pressure sensitivity will not be able to be measured with a stylus. When you apply more pressure to a surface with your finger, the skin around the bone presses down with a larger surface area, this obviously doesn’t occur with the tip of a stylus.

This is definitely good for resistive touchscreens and a jump forward for devices that will continue to use them, but in many cases I still feel like capacitive touch offers the best experience.