This story is currently developing at MWC. Updates will be added below. 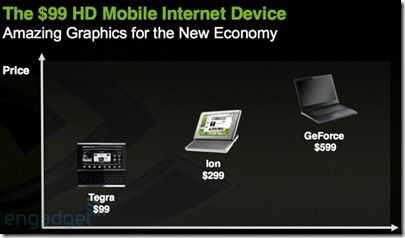 “A $99 Tegra-based MID is expected to be announced by Nvidia at MWC. The MID includes full high-definition 1080p video playback and full Wi-Fi and 3G mobile broadband connectivity capabilities. The always-on device can go “days” between battery charges, a company spokesman said.”[Via PCWorld]

Update 1:
It’s not quite clear what they mean by $99. Subsidised perhaps? If so, ignore the hype on the pricing but it’s interesting to see nvidia highlight the Tegra 600-based MID (ARM core) and the Ion based PC shown in the diagram (looking like it’s based on the old HTC Shift!)

Udate 2: Press release. note that there is no mention of voice here. [Source]

BARCELONA, Spain, Feb. 16 MOBILE WORLD CONGRESS 09 â€” Today’s users want an always-connected device for social media applications such as Facebook and YouTube, as well as great multimedia performance for recording and watching HD movies and videos on the go.

NVIDIA Corporation, the inventor of the graphics processor, today introduced a new platform, based on the NVIDIA(R) Tegra(TM) 600 Series computer-on-a-chip that enables a $99, always-on, always-connected HD mobile internet device (MID) that can go days between battery charges.

This platform will enable OEMs to quickly build and bring to market devices that carriers can offer for as low as $99 â€” bringing broadband connectivity and all of the Web’s HD content to the masses.

“Mobile internet devices have evolved to provide consumers with the performance and connectivity required by today’s lifestyle, inch said Michael Rayfield, general manager of the mobile business unit at NVIDIA. “Until now, consumers could get just another ‘gadget’ with limited functionality or a PC that’s not ‘always on’. A Tegra-based platform combines the best of both worlds. inch

“The next generation of smart, connected, service-oriented devices are centered around rich multimedia experiences and enhanced functionality, inch said Mukund Ghangurde, Director, CE and Consumer Product Management at Microsoft Corp. “We are pleased to collaborate with NVIDIA to develop platform resources that assist OEMs in quickly bringing these new devices to market. inch

In addition, NVIDIA partnered with ST-Ericsson to add 3G communication capability into this new platform, allowing for seamless connectivity, worldwide.

“ST-Ericsson together with NVIDIA have developed a Microsoft Windows Embedded CE implementation using the ST-Ericsson U335 and the NVIDIA Tegra which is ready for customer design development, inch stated Jorgen Lantto, Chief Technology Officer, ST-Ericsson. “This solution takes advantage of the high volume, IOT tested and proven U335 modem solution together with NVIDIA which takes multimedia performance to a new level. inch

ICD, a leading consumer ODM, also announced support of the new class of devices enabled by this new platform.

“ICD has long believed that there will be a new generation of innovative connected devices. Designing these devices around the Tegra platform will bring carriers an amazing level of functionality at prices as low as $99, inch said David Hayes, President and CEO of ICD.