I just wanted to round-up a couple of Opera-related news items that have come through the wires over the last few days. The first is an announcement about a ‘Opera Turbo’ and the second is an announcement that Opera are joining LiMo.

The Opera Turbo announcement is one I’ve been waiting for ever since the 9.6 SDK announcement way back at IBC in September. It’s OBML support, now renamed and re-marketed as Opera Turbo. At least I think it is! OBML is the process/protocol that Opera Mini uses and all the diagrams and descriptions point to the same methodology although the OBML acronym isn’t actually mentioned anywhere in the documentation. 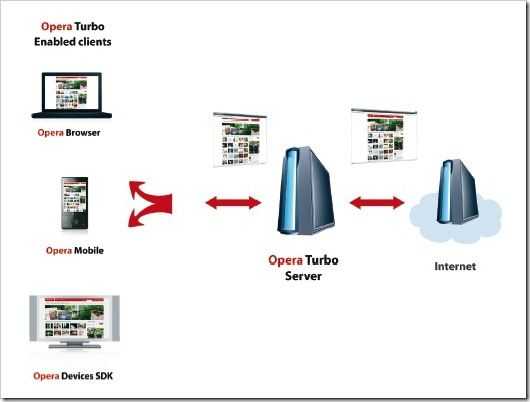 What it means is that you could have one program for both WLAN and WWAN-based usage. If you find yourself in a 2.5G area or your data is being charged on a per-byte basic you can just switch to turbo mode and carry on with your familiar browser using a compressed, proxied service. The best of both worlds!

The second announcement came today and informs us all that Opera has joined LiMo the Linux-based mobile software foundation (who also made announcements today.)

Opera Software today announced that it has joined the swelling ranks of mobile Linux leaders in the LiMo Foundation. Opera has a long history in developing its browser for the Linux platform and by joining this mobile Linux community the company hopes to contribute to the advancement of open and accessible mobile phone technology.

Opera’s ‘One Web’ vision revolves around the hope for a single, pervasive Internet, available to anyone, anywhere. By working closely with LiMo, Opera can ensure absolute compatibility with this platform, enabling easier development and faster time-to-market. Together, Opera and LiMo plan to nurture richer services, better user experiences and more affordable devices in the mobile industry by adhering to open standards-based development.

Joining LiMo might not exclude them from joining other organisations but it certainly sends a strong message out to Moblin and OHA.