Life has been so busy over the last month that I’ve hardly had a chance to think about CeBIT and yet it starts in just 5 days. On Monday, I’ll be meeting JKK and Sacha in Hannover and we’re going to hit CeBIT as hard as we can.

Fortunately the accommodation, tickets (I have a press pass again this year) and transport have all been arranged so all that remains to do is fix up the schedule, write up a hit-list and organise the kit.

I’ll write about the ‘hit list’ in the next few days as we’ll probably use it for the basis of a warm-up podcast tentatively planned for Friday but let me quickly talk about the kit I’m going to use at CeBIT.

Due to three ‘smoked’ UMPCs, a couple of no-show UMPCs and a general need to keep spending down this year, I’m having to really cobble together the best I can from the devices I have left here. I’m not exactly struggling to find a PC to take but I had planned a different set of devices and was planning to have a bit more of a ‘showcase’ setup.

I will go with the three-device strategy (phone, mid, notebook) because of flexibility, fall-back and battery life. I’ll take my Nokia N82 for the important tasks of voice, SMS and email and it will also come in handy for some direct-to-flickr photo shooting due to it’s superb camera optics and flash. I might use it for a bit of Google Latitude fun and the occasional 3G Bluetooth modem but the idea is really to preserve it for essential comms. At the top end of the range i’ll be taking my laptop. Actually it’s a Medion Akoya Mini netbook but I don’t have anything else so it’s going to serve as my main keyboard and screen during the event. It’s far from the perfect mobile netbook though and I’ll have to deal with a lack of built-in 3G, no Bluetooth and a poor 2hr battery life. On the positive side, I’ve used it a lot and it’s got a stable build with all my applications running well. 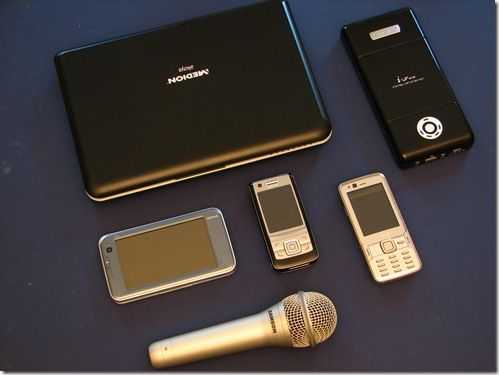 As the third device, I want to take a MID. The original plan was to use an Aigo P8888 but the standard 2hr battery life and lack of standard XP build has put me off buying one. I’m not a JKK and so hacking XPe and piggyback batteries was never on the cards. The Viliv S5 didn’t hit the market on time. The Wibrain i1 prototype doesn’t standby or hibernate due to an incomplete BIOS setup and I’ve killed the Raon Everun Note I was preparing. As I look across my devices for a MID, the only one I can see is the Nokia N810, a device that I had ignored for the best part of a year but started using again recently when I upgraded the OS and installed a bunch of community applications on it. As an RSS, mobile website, IM and twitter tool, it’s working out quite well. Web browsing is frustratingly slow but certainly better than my S60 device and with 4 hours wifi-on battery life, it can sit and pick up feeds and tweets for a long time before the battery needs changing so today I bought a second battery and a USB charger cable for it, fished out an old Nokia 3G phone with a broken backlight and will tether the two up on a 2.50-Euro per day pay-as-you-go UMTS contract, drop the phone in my bag or on my belt and put the N810 in my pocket as and use it as as always-on ‘informer’ and twitter tool. I’ll also be able to put comments on photo’s at Flickr and post to the blog using the Flickr blog posting tools as Jenn did at CES. The N810 needs a lot more power to turn it into a real MID but the size, battery life, screen and keyboard should help to keep me updated on the go and certainly won’t need much space.

One thing I’m really happy about is that I’ll only need one power brick for all the kit and the reason for that is a nice little U2o power pack I’ve got from Ultimate-Netbook.co.uk. I did some field testing for them last year and we’ve been happy with the results so they now sell it. Fortunately they let me keep it after the testing so I’m now armed with a 55wh power pack that takes a 19v input (the power brick from the Medion Akoya plugs straight in) and provides 5V (via USB), 9v, 16v and 19v outputs. There’s a selection of adaptors with the device so both my phone, the N810 and the Medion Akoya will run or charge from it. If I treat the Akoya well, I’ll get about 6hrs working time out of it which should be fine for a day’s work on the floor.

For photo and video work I’ll be taking my trust Canon S2IS and tripod. The long lens, VGA video capability and great stereo mics are perfect for recording conferences or device overviews and although a DSLR with 720P video recording would be my preference, it won’t be hard to get some good results out of the S2. Besides, JKK has a new Canon HD cam so we’ll be using that for most of our videos.

Finally, I’ll take the Samson USB mic which is great for mobile podcasting and interviews. Audacity is installed on the netbook and it’s an easy process to upload an MP3 to UMPCPortal. 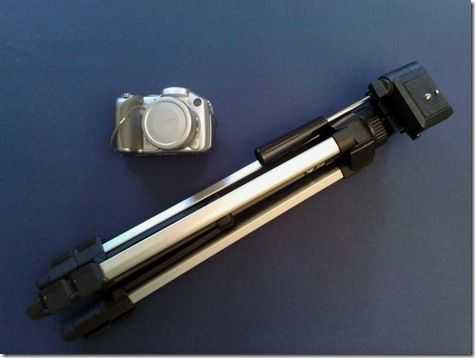 I’m a little sad there’s no ultra mobile PC in there but it’s a proven set of kit that I’m very familiar with and that should help to keep the stress levels down. The whole kit comes in at 4kg which is very good considering I’ve got the tripod, cam and a 400gm microphone included in that. Total cost of the complete kit is around 1400 Euros (new)

Of course, if I have any issues, I won’t need to look too far for help. Sascha the ‘netbook king’ is joining us in the accommodation and on the floor and he’ll be bringing a stack of netbooks so I’ll probably get some good hands-on opportunities with some of the netbooks I haven’t had a chance to use yet. JKK is with us too and he has a good set of kit too so between us, well have no excuses.

As JKK, Sascha and I prepare over the next few days you’ll probably here a few more warm-up stories. We’ve tentatively planned a podcast for Friday evening so expect a CeBIT warm-up post over the weekend.