Slashgear hands-on with the UMID M1. 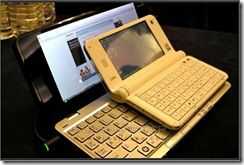 This is an article we’ve been waiting to see since MWC started on Monday; Hands-on with the UMID M1. The video (below) gives you a good idea of the size and form-factor, there’s a set of images and there are some interesting comments on usability.

we tried typing and found that, with the limited key travel and minimal spacing in-between, it’s tough to do much more than peck out emails

It’s tricky to hold the UMID M1 with two hands and control the screen with your thumbs, as the broad strips either side of the display get in the way; similarly, the strip of keys in the center of the ‘board can be difficult to reach, unless you hold the edges of the MID with the very tips of your fingers.

As Chris Davies says, this is a niche device but it’s very close to being an ideal build for people looking at a UMPC. I see it as a thumb-able device in two hands, very easy to be using in one hand and having used XP on 1024×600 a lot, I know it’s simple to pump up the font and selection areas on Windows XP to make it easier to use the touchscreen. There’s also a mention in the report of 4-hours on-time. I suspect that’s not with Internet in-use though. 3 hours active online use would be my guess based on the 17wh battery. (4-6w drain under internet browsing conditions based on what I’ve seen on the Wibrain i1.)

Considering that the UMID is likely to be faster than the Vaio P in many operations (the slimmer XP build vs the Vista build on the Vaio brings advantages) smaller and a lot cheaper, it’s much more suited to real on-the-go activities. There’s still the outstanding question of whether it is really, truly pocketable but i’ll be testing that out at CeBIT. (I assume it will be there!) And finally, we’re still waiting for that price!

The Slashgear article and images are here. More info and links in the UMID product page. 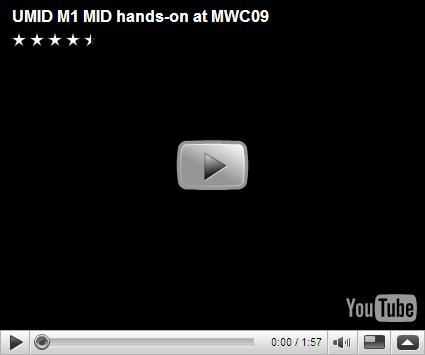 Thanks, Mikey, for the heads-up.