Bluetooth audio adapter for your iPhone/iPod on Woot today — $9.99 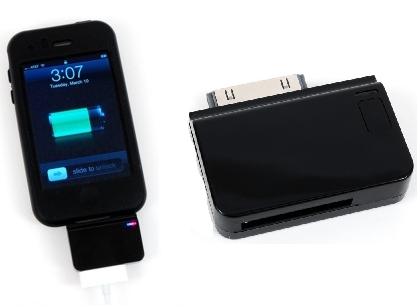 “But Ben, my iPhone already has Bluetooth!”, I’m sure you are saying right now. Thanks to Apple, you can barely use it for anything, and support for A2DP audio streaming and AVRCP is definitely not included. Luckily there are ways around this. Take the wiRevo Stereo Bluetooth Adapter for iPod and iPhone, which you can buy today on Woot.com’s Yahoo partner site, sellout.woot.com. For anyone who has managed to avoid hearing what Woot is, it is the most famous deal-per-day site on the interwebs. They offer one item per day with a limited stock, and when it sells out, it is gone for good (translation: if you want one of these, buy quick!).

The wiRevo Stereo Bluetooth Adapter for iPod and iPhone supports A2DP and AVRCP, which roughly means that you’ll be able to listen to good quality stereo music through a pair of Bluetooth headphones. There is also a pass-through for your power adapter which means that you can charge your iPhone/iPod while the adapter is plugged in. It is sad that Apple couldn’t build this functionality directly into the iPhone’s bluetooth stack, but $9.99 isn’t a bad deal if you want to remedy Apple’s flaws, and an even better deal if you have an iPod that doesn’t have Bluetooth to start with. I’m not sure exactly which generations of iPod this works with so I’ll leave that little mystery up to you before purchasing it. Seems like this same accessory is selling for around $39 elsewhere on the internets.