I just reported that Mobilx have the Eking i1 available to order and now they tell me the Clevo TN70M is coming too. It’s raining new devices today! The TN70M is a device that JKK and I tested over a year ago at CeBIT 2008 (video) and we were very interested in the specs. How does it look today though?

The TN70M reminds me of the Kohjinsha SA5, the touchscreen version of the SA1, a pre-netbook device I used for blogging at CeBIT 2007. It’s an 800×480 convertible touchscreen device but based on a 1.33Ghz Intel Atom and includes ExpressCard 34 slot, 60GB hard drive and a 4-cell battery. This was one of the key features we highlighted at CeBIT and at that time I estimated a 7-hour runtime. Based on how the Eking i1 performs (6 hours on the 32wh battery) I see no reason to doubt that with a 37wh battery (2008 specs,confirmed) this is going to be close to that 7hr mark. It weighs 900gm.

When I bought the SA1 in 2007, it cost me over 1000 Euros. The TN70M price is 472 Euros including taxes (about 393 Euro for exports) but excluding operating system. That’s double the battery life, double the processing power for half the price!!! Given that the TN70M was supposed to have a free PCI-Express Mini slot inside (unconfirmed at the moment) this could make an interesting Linux tablet/netbook project. 800×480 screen though. 800×480 will help touch navigation and viewing but with so many 1024×600 devices around, is it enough? 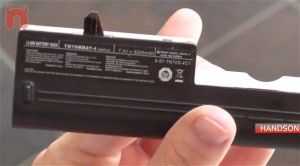 Update: Ndevil.com have a recent YouTube video up (German, accompanying article) that shows the battery unit with a 37wh capacity. Thanks Balazs.