Over the last 48hrs I’ve been focusing on the Gigabyte Touchnote T1028M that has been sent over by Mobilx. 48hrs isn’t a long time but having done the unboxing, a full 3hr live test (recording) with viewer feedback (thanks to the 500+ people that dropped in during the live session) and Q&A along with a full 2-day use as my main PC, I feel that I’m a position to be able to give you the highs and lows.

The Touchnote is a device that falls between, or rather overlaps, the netbook, tabletPC and notebook categories and I have to say, I’m quite impressed with it. It’s a very unique and enjoyable device with some excellent features and very few issues.

The images above sum up some of the features that make it unique. Convertible screen, touch layer and 3G-ready. The Touchnote follows in the steps of the M912M, the 8.9 inch convertible and in my opinion, fixes all the problems that existed with that device.

Let me quickly run down the main points of note.

The Touchnote has been loaned to UMPCPortal by Mobilx who are also taking advantage of the built-in SIM slot, easy PCI-Express Mini slot access and, unique for any device I know of, pre-wired antenna. I’ve done 3G upgrades in the past but antenna reception has always been an issue. With the Touchnote, Gigabyte take all the worry away. The reception on the antenna is excellent. For the first time ever on any device, including a smartphone, that I have owned, I was able to get UMTS connectivity in my cellar studio!

In order to highlight the disk performance I’ve run through the CrystalMark 2003 performance test. The result of over 28000 is one of the best I’ve seen for a stock netbook and is attributable to the disk which really does make a noticeable difference in operation. 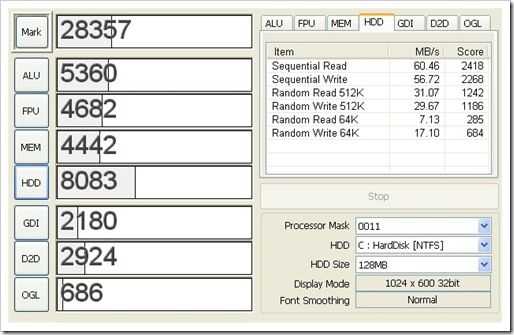 The Touchnote offers a lot more than the average netbook and offers significant improvements over the groundbreaking M912M that came before it. Convertible touchscreen, draft-n WiFi, BT2.1, fast 2.5 inch drive, easy upgrade possibilities, Expresscard/34 and the well-prepared SIM card and 3G Antenna are a a feature set you won’t find on any other device. The glossy screen and average battery life are really the only two points I could highlight as issues. Oh, and perhaps the fact that an advanced N280-based model is coming soon! Currently Gigabyte stands alone in offering a 10 inch touchscreen notebook at this price point but they may not have the playground to themselves for long. The ASUS T101H is an obvious competitor and many will be laboring over the choice between the two. Until we get hands-on with the T101H we won’t be able to make a decision but until then, we can certainly say that the Gigabyte Touchnote T1028M is a unique, good value and well thought-out choice in both the prosumer end of the netbook market and the budget notebook market.