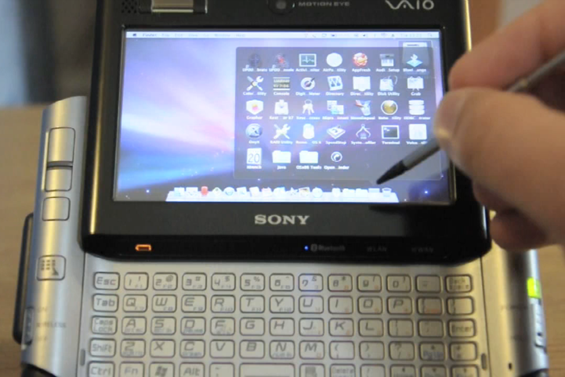 The guys over at Micro PC Talk have had Mac OS X running on the VAIO UX series [Portal page] for some time now, but a recent video by MPCT forum user perrin21 shows a UX390 running the latest version of Apple’s OS X pristinely. Perrin21 added a few nice mods to his UX390 [Portal page], including a draft-N WiFi card to connect to his/her Airport Extreme, and an Mtron SSD. Everything else on the unit is stock. The video demonstrates the general responsiveness of the OS on the unit and a fully functional, and calibrated, touchscreen. There is some web browsing action, a demo of Boxee, and Front Row, all appearing to work beautifully on the UX390. Not bad for someone who wants OS X in their pocket, am I right? Catch the video below: