Will Apple really release something drastically different from the iPhone? 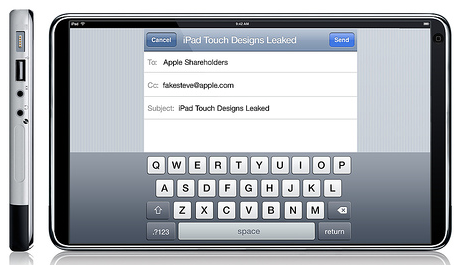 Time draws closer to the event in which Apple is rumored to unveil a new, larger, touch oriented device. Let’s call it the iPod Plus (as Chippy coined it) essentially a device based around the concepts of the iPhone/iPod Touch (simple touch navigated software) but with less focus on the phone aspect and more focus on media and web interaction. No one knows for sure yet but people are imagining a small slate style device with a highly touch friendly OS with a screen ranging from 5-8 inch. Being a happy iPhone owner, I’m very excited about the prospect of a new device that could culminate the lessons that Apple learned from the iPhone and use the great part of that experience to power a new media rich device. As I think about what it could mean for the company to release a new device, which would probably have a very different size than the iPhone and also run software that isn’t directly compatible with the iPhone hardware, I wonder if it will really happen the way that it is rumored, considering the hurdles that stand in the way.

Apple has set off some sort of revolution with their App Store, an application that makes it very simple for users to find useful software for their iPhone/iPod Touch. Since the release of Apple’s App Store, we’ve seen the App Catalog for the upcoming Palm Pre, the Android Market for Android powered devices, the Windows Marketplace for devices running WM 6.5, and the BlackBerry App World for certain BlackBerrys. The concept of an App Store is great for many reasons. The biggest of which are the ease in which users can find and obtain applications and the ease in which developers can distribute their applications. By providing a virtual store for all third party software, Apple makes it easy for developers to focus on creating applications instead of having to make round-about back-ends for activation codes if they wanted to sell their applications. The App Store is an huge draw for developers.

That is apparent as Apple recently announced that the one billionth application was downloaded from the App Store. Just throwing out some rough numbers, let’s say that 50% of the applications downloaded from the App Store were free and that the other 50% cost just $2.99. If 500,000,000 applications have been downloaded at $2.99 each (Apple takes 30% of the price of the app), then you are talking about $448,500,000 of profit directly into Apple’s pocket by doing no more than providing a framework on which developers can reach an audience. Clearly the App Store and the concept of applications is very important to the success of the iPhone/iPod Touch, and I would say that Apple would need to think long and hard before coming out with a new device that would be unlikely to support some 35,000 applications which currently run across the entire iPhone/iPod Touch (gen 1 and 2) line of devices.

If they were considering this, I don’t think that Apple would release a device that is essentially a giant iPhone. More likely it seems that they would release a media rich device using an improved version of the iPhone OS (which is actually based on the full fledged OSX). Given the larger dimension of the device, and the likelihood that it won’t be phone, I think that Apple will have designed a new navigation philosophy and will probably want that experience to translate over to applications. Thus I don’t feel that they could simply port over all of the applications currently available in the App Store. Not only would the existing applications not work without scaling on a higher resoultion screen, but these apps would need to be rebuilt entirely for this new device to be compatible with the improved version of the iPhone OS and to function using the same navigation principals as Apple established with the device, as many apps in the current App Store have a consistent interface design that works to make system-wide finger navigation viable.

By releasing a new device based on different principals of user interaction and making current App Store applications incompatible, Apple would be throwing its current library of 35,000 third-party applications out the window and additionally they would be trying to split their strong base of developers.

As a developer who wants to sell an application, it would be hard for Apple to convince you to start developing for a new device that doesn’t have backward compatibility with the old devices. Any developer would realize that the current audience, which includes anyone with a 1st or 2nd gen iPhone or iPod Touch, would be much larger than a newly released device. And why might someone spend the time developing an application for the newer hardware when the audience would be so much smaller. Sure, eventually the numbers would start to even out, but it would be hard to get the ball rolling and see the same widespread development of applications on the iPod Plus as we’ve seen with current App Store apps.

Apple’s steady strategy for said devices has been based on compatibility. Even while coming out with new generations of the two devices, Apple has made it clear that they want every application in the App Store to be able to run on every generation and model of their ‘touch’ series of devices. Why break the trend now? There is definitely a time to move forward and come up with something new but Apple has seen great success with their current strategy and it might be too early for them to jump to new hardware and thus, new applications that would require that new hardware to function.

Nintendo is a company that works using a similar strategy of backward-compatibility. The company is responsible for one of the most successful handheld game consoles and part of that has to do with the fact that the handheld gaming system can play the same games from the previous handheld game generation released all the way back in 2001. Similarly, Nintendo’s Wii console can play games from the previous generation that was also released in 2001. While the Nintendo Wii definitely isn’t the most powerful of the three current gaming consoles, it is doing better than the other two in sales, partly due to its backward compatibility.

I’ve recently come to realize how great the iPhone is as a gym companion. Heading to the gym to do some exercise with the iPhone in a holster on the waist has plenty to offer one who is doing various gym activities. Music is the most obvious thing that comes to mind. It couldn’t be easier to put together a playlist and with the included earbuds, you can change tracks easily using the button on the cord without even having to look at the iPhone, one can even answer and hang up calls with the same button and the ringtone comes right over the earbuds. Beyond just listening to music, the iPhone can be great for web consumption when on the stationary bike. Some people like to read a book using the little shelf on the bike, but the iPhone sits there just as well and provides a portal into one’s online life. Its great to be able to exercise while checking twitter, Facebook, Google Reader, etc.

While hunched over and tapping my fingers around on the iPhone’s small screen, I realized how great that the little magazine/book shelf would work with an iPod Plus. Imagine a 7 inch screen sitting flat right there where a book might go and offering a great touch navigated media experience. You could read full web pages and easily flick your way up and down the page to see the contents without having to frequently pinch zoom. Considering more powerful hardware, you could have a nice twitter app running in the background that would notify you of new updates using a Growl style notification system. Sounds great to me, but when I considered that the iPhone simply comes with me to the gym in a holster on my waist, I wondered how I would carry such a device with me.

With a 7 inch screen I don’t think it would be very pocketable. It wouldn’t be the companion style device that could play music for you while lifting. What does one do with a device that sits between the size of a pocketable phone and a notebook? The iPhone is usable while walking because it can be held in one hand an operated, but a device such as that which has been rumored sounds like it would need to sit down on a table and have the attention of both user’s hands in order to be operated. Sound familiar? That’s right, notebook basically needs to be put down on a table and have interaction from both hands to be effectively used, and I don’t think that Apple wants to compete with their own notebook line. Apple hit the sweet spot when coming up with a device that could be used with one hand and slip into the pocket with no problem.

There are certainly a lot of factors that go into the creation of a new device and I’m sure that Apple looks into this stuff with much scrutiny before trying to push a big new product. While I would love to see an iPod Plus device with a large screen that featured a great new interface and the ability to consume media rich content, I think that it is unlikely to see anything radically different from an iPhone. It doesn’t seem likely that Apple would release a device that is more powerful, isn’t compatible with the apps in the current App Store and also sits at a size that competes with the MacBook line of notebooks. What’s more is that Apple doesn’t want to split their developer community, and would have a hard time starting up the wildfire of rapid application development that was part of success of the current ‘touch’ series of devices.