[This post is updating with info from the live press conference. There’s a live discussion going on from the event here. Thanks to @charbax and ArchosFans for the live feed. Charbax will be posting video from the event and archosfans.com later.]

More updates below but one final update needs to go up here before I lock this post. We’re hearing that this could be a multi-touch device. Unconfirmed at the moment.

It looks extremely thin. Viliv have a challenger!

Windows 7 delivers a great media experience with the Menlow platform so this makes sense for Archos although I wonder if they’re adding a user interface layer.

I’m worried about the hard drive though. That could be a bottlekneck for Windows 7 as it has been in the past on UMPCs. 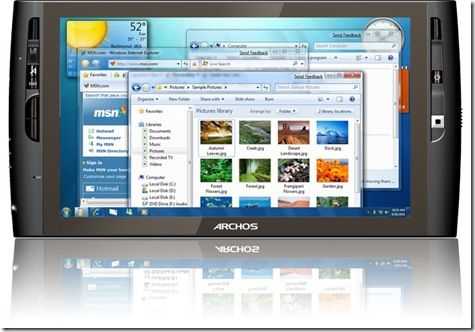 What better innovation for a MiniPC than to get rid of keyboards?
ARCHOS once again is leading the way in innovation, with the introduction of the MiniPC of the future, the ARCHOS 9PCtablet. The ARCHOS design team has coupled groundbreaking design with the most advanced technologies, by leveraging their expertise from the design of the Internet Media Tablets. The new PC combines the performance of a high end PC with breathtaking aesthetics, excellent ergonomics and a tactile interface that ARCHOS has built their reputation on. Pure lines, extreme thinness (0.63”), less than 800g and a stunning black finish, the ARCHOS 9 pushes the boundaries of elegance and simplicity on a MiniPC, fulfilling all expectations of the most mobile users.
Intuitive and easy to use, the ARCHOS 9 delivers an unrivalled user experience, and is set to replace the traditional computer. Without a physical keyboard, it provides a virtual keyboard, very easy to use on the the resistive touchscreen, and has an optical trackpoint to let you surf the web, communicate, work and entertain anywhere.
The ARCHOS 9 incorporates the new Intel® ATOMâ„¢ Z515 processor, an 80 GB1 hard disk, Bluetooth to tether wireless accessories, and 2 antennas to receive DVBT TV with diversity reception.
And what’s more, the ARCHOS 9 is running Microsoft® Windows 7, the latest version of the most commonly used operating system in the world.
The ARCHOS 9 provides all the power and comfort needed for daily usage.
It combines an impressive performance and a rich multimedia experience to deliver the most advanced PC in the world. Be ready to discover it.

Update: Archosfans have their Ustream video available and will post the high quality footage soon.